Lars Magnus used the family name "Wingblad" but his only living child, Anton, used the surname as "Winblad" and that is how it appears in his descendants.

There was an Erick Vingblad (1798-1848) born in Vingåker, who married a Britta Ehrsdatter and had a daughter Anna. Due to the proximity in birth dates and location, Lars and Erick are likely to be siblings or otherwise closely related.

Lars became engaged to Anna Ericsdotter Wennström. They made their vows at Katarina kyrka, Stockholm on February 9, 1823. This was three or four months after impregnating Brita Christina Ökneberg.

At their own request Lars and Anna were released from their vow to marry on August 03, 1824. The record says: "after closer knowledge of each others temperament and reasoning they realized that a union of marriage would cause them both unhappiness". The real reason was Lars child with another woman. They had been engaged for one year and six months.

Lars, just two months later, married Brita Christina Ökneberg (1799-?) on October 10, 1824 in Stockholm, Sweden. She was born on October 28, 1799 at Torshälla parish, Södermanland, Sweden. Her parents may have been: Lars Öknaberg (1755-?), a soldier; and Brita Olsdotter (1757-?). The record was indexed in Familysearch but the name of the church was not recorded. The following churchbooks have been searched looking for the original marriage record and it has not been found: Maria Magdalena Church, and Katarina Church. 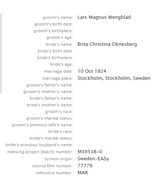 1830 Winblad and Ökneberg household examination in Stockholm
Add a photo to this gallery
Retrieved from "https://familypedia.wikia.org/wiki/Lars_Magnus_Winblad_(1797)?oldid=1454270"
Community content is available under CC-BY-SA unless otherwise noted.