Kullu is a district in Himachal Pradesh, India. The district stretches from the village of Rampur in the south to the Rohtang Pass in the North.

The largest valley in the district is called the Kullu Valley, which is also known as the Valley of the Gods. There is also a town called Kullu which sits on the banks of the Beas River in the central part of the valley. Another important valley in the district is the Lug valley where the main forest contractors have been extracting timber from the forests for the last 150 years and continue to do so today.[1] Farther north lies the town of Manali.

The ancient seat of the kings of Kullu was at Naggar Castle, about 12 km north of the present town, and thought to have been built in the early 17th century by Raja Sidh Sing. Raja Jagat Singh (1637-72) moved the capital in the middle of the 17th century to its present position, and called it Sultanpur. The Royal compound consists of the "Rupi Palace, several temples, and a long narrow bazaar descending the hill."

The British took all of Kangra and Kullu from the Sikhs in 1846. It is still used as home by the royal descendants, but the more ancient Naggar Castle was sold to the British.

Since the onset of the most recent unrest in Kashmir, Manali and the Kullu Valley in general, have become important destinations for tourists escaping the summer heat of India.

In the eastern part of the district, the village of Manikaran contains Sikh and Hindu temples and popular hot springs. The Hidimba Devi Temple is at Manali. There are also many Sikh villages located close to Manikaran. To the northeast of Kullu Valley, lies the famous, Malana Valley. 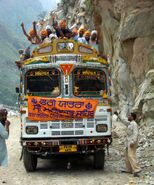 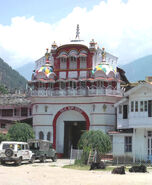 Raja Rupi Kulu Palace, 2004
Add a photo to this gallery

Retrieved from "https://familypedia.wikia.org/wiki/Kullu_district?oldid=703948"
Community content is available under CC-BY-SA unless otherwise noted.