Familypedia
Register
Don't have an account?
Sign In
Advertisement
in: Kortrijk, Cities and towns in Flanders, Settlements in Belgium, Communes of West Flanders

Kortrijk (English also Courtray;[1][2] official name in Dutch: Kortrijk; French: Courtrai, ; Latin: Cortoriacum) is a Belgian city and municipality located in the Flemish province West Flanders. It is the capital and biggest city of the arrondissement of Kortrijk, which is both a judicial and an administrative arrondissement. The wider municipality comprises the city of Kortrijk proper and the villages of Aalbeke, Bellegem, Bissegem, Heule, Kooigem, Marke, and Rollegem.

The city is situated on the Leie, 42 km (26 mi) southwest of Ghent and 25 km (16 mi) northeast of Lille in France. Both Kortrijk and Lille are part of the same transnational Eurodistrict urban area with around 1,900,000 inhabitants.[3] As the biggest city of southern West Flanders, Kortrijk has many schools, hospitals and shopping streets.

Kortrijk originated from a Gallo-Roman town, called Cortoriacum at a crossroads near the Leie river and two Roman roads. During the Middle Ages, Kortrijk grew significantly thanks to the flax and wool industry with France and England and became one of the biggest and richest cities in Flanders. The city is often referred to as City of Groeninge or City of the Golden Spurs, referring to the Battle of Courtrai or the Battle of the Golden Spurs which took place on 11 July 1302 on the Fields of Groeninge in Kortrijk. In 1820, the Treaty of Kortrijk was signed, which laid out the current borders between France and Belgium. Throughout the 19th and 20th century, Kortrijk became a center of the flax industry and remains an important region within the Belgian textile industry today.

Today, Kortrijk is the largest city in southern West-Flanders with several hospitals, colleges and a university. Kortrijk was the first city in Belgium with a pedestrian shopping street, called the Korte Steenstraat. Nowadays, a big part of the historical city center is a complete pedestrian area with lots of shops and shopping malls such as the new covered K Shopping Centre and the Ring Shopping Kortrijk Noord centre).

Origins to the 13th century[]

Cortoriacum was a typical Gallo-Roman vicus at an important crossroads near the Leie river. It was situated on the crossroads of the Roman roads linking Tongeren and Cassel and Tournai and Oudenburg. In the 9th century, Baldwin II, Count of Flanders established fortifications against the Vikings. The town gained its city charter in 1190 from Philip, Count of Flanders. The population growth required new defensive walls, part of which can still be seen today (the Broeltorens).

In the 13th century, the battles between Fernando of Portugal, Count of Flanders and his first cousin, King Louis VIII of France, led to the destruction of the city. The Counts of Flanders had it rebuilt soon after. To promote industry and weaving in the town, Joan, Countess of Flanders exempted settlers in Kortrijk from property tax.[4] From that time, Kortrijk gained great importance as a centre of linen production.

Battle of the Golden Spurs[]

In 1302, the population of Bruges started a successful uprising against the French, who had annexed Flanders a couple of years earlier. On May 18, the French population in that city was massacred, an event that could not go unpunished. The famous ensuing Battle of Courtrai or the Battle of the Golden Spurs (Dutch: Guldensporenslag) between the Flemish people, mostly commoners and farmers, and Philip the Fair’s knights took place near Kortrijk on July 11, resulting in a victory for Flanders. This date is now remembered as a national holiday by the whole Flemish community.

Following a new uprising by the Flemish in 1323, but this time against their own Count Louis I, the French invaded again. These Flemish acquisitions were consolidated by the French at the Battle of Cassel (1328). Louis I’s son, Louis II, then Philip van Artevelde briefly regained the city in 1381 but lost it again the following year at the Battle of Roosebeke, resulting in a new wave of plundering and destruction.

Most of the 15th century was prosperous under the Dukes of Burgundy, until the death of the Burgundian heiress, Mary of Burgundy, in 1482, which ushered in renewed fighting with France. The 16th century was marked by the confrontations engendered by the Reformation and the uprising of the Netherlands against Spain. Louis XIV’s reign saw Kortrijk occupied by the French five times in sixty years and its former fortifications razed to the ground. The Treaty of Utrecht finally assigned the whole area to Austria.

During the French Revolutionary Wars, Kortrijk was besieged several times in 1794

After the French Revolution and the Napoleonic era, the textile industry, based on flax, and the general economy of the city could finally prosper again. Kortrijk was heavily bombed in the summer of 1917, but even more damaged by the allied bombing in 1944. The city was an important railway hub for the German army, and for this reason was the target of several allied air-strikes. On July 21, 1944 (the Belgian National Day) around 300 Avro Lancasters dropped over 5,000 bombs on the city centre.[5] Many historical buildings on the central square, as well as the old railway station, were destroyed.

The metropolitan area, including the outer commuter zone, also consists of Kuurne, Wevelgem, Zwevegem and Harelbeke. Although these municipalities have strong morphologic ties with Kortrijk, they aren't officially part of the city.

Much of the city's medieval architecture remains intact and is remarkably well preserved and restored. The city center is one of the largest carfree areas in Belgium. The béguinage, as well as the belfry, were recognized by UNESCO as World Heritage Sites in 1998 and 1999. Interesting highlights are:

Museums in Kortrijk include:

Kortrijk lies at the intersection of three highways:

Kortrijk has an extensive web of public transport lines, operated by De Lijn, providing access to the city centre and the suburbs (city lines, Dutch: stadslijnen) and to many towns and villages in the region around the city (regional lines, Dutch: streeklijnen).

At Kortrijk main railway station, there is a bus station where regional buses stop as well.

The river Leie is an important way of transporting goods through inland navigation. The Bossuit-Kortrijk Canal enables in the city centre a direct connection with the river Scheldt.

From the 1970s on, the planning and later the execution of the so-called Leiewerken (Leieworks) started. These construction works comprise the deepening and widening of the river. This should enable ships with 4400 tons to navigate from France to the Scheldt. At the same time, this project includes a thorough urban renewal of the riversides in the city. Seven new bridges have to give a new architectural impulse to the river quarters as well as the construction of several new parks along the river. Four bridges already opened (Dambrug, Groeningebrug, Ronde van Vlaanderenbrug and Collegebrug). The Noordbrug will open in 2010. The Budabrug and Reepbrug are planned after the opening of the Noordbrug. The construction works started in 1997 and should be ready in 2012.

Kortrijk serves as an educational centre in south West Flanders, attracting students from the entire region.

There are 55 schools in Kortrijk, on 72 different locations throughout the city, with an estimated 21,000 students.[8]

Even though Kortrijk is a Dutch speaking town, it borders with Wallonia, and is only 9 km (5.6 mi) away from the French border. This has created an urban area that extends across linguistic and national borders. The mayors of Lille, Kortrijk and Tournai met in Kortrijk on January 28, 2008 to sign a document creating the first European Grouping of Territorial Cooperation within the EU. The purpose of this new organisation is to facilitate the movement of people within this area of nearly 2 million people.

The city is host to some sizable cultural events such as:

Also, trade shows and events such as the international Design Fair Interieur, Busworld and the Eurodogshow take place in the Kortrijk Xpo event center. These fairs attract numerous visitors to the city.

In July and August there are various boat tours on the river Leie.

Local specialities include Kalletaart (applecake with Calvados), Peperbollen, Biscuits, and chocolate little beguines. The town of Heule is home to the small brewery Picobrouwerij Alvinne, while Bellegem is the hometown of brewery Bockor.

Kortrijk has several indoor shopping centres such as the Ring Shopping Kortrijk Noord, Bouwcentrum Pottelberg and the new shopping centre K in Kortrijk (opened March 2010). The later is a downtown shopping centre, which links the main shopping street Lange Steenstraat with the Veemarket square and includes as many as 90 shops as electronics store Saturn, H&M, Zara and many other clothes, food and houseware stores.

As anywhere in Flanders, professional cycling is very popular. Many cycling races start, finish or pass through the Kortrijk region. Amongst them are the Driedaagse van West-Vlaanderen, Kuurne–Brussels–Kuurne, Gent–Wevelgem, the Ronde van Vlaanderen and Dwars door Vlaanderen. Kortrijk also hosts an after-tour criterium at the start of August called Kortrijk Koerse. Many of the riders who participated in the Tour de France usually appear at the start. 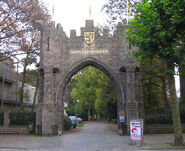 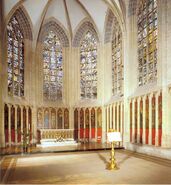 Stadswaag in with the Saint Michael's church in the background 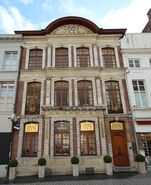