Keith Rupert Murdoch /ˈmɜrdɒk/,[1] AC, KCSG (born 11 March 1931) is an Australian-born American media proprietor. His father, Keith Arthur Murdoch, had been a reporter and editor and a senior executive of the Herald and Weekly Times newspaper publishing company covering all Australian States except New South Wales. After his father's death in 1952 Keith Rupert Murdoch declined to join his late father's registered public company and created his own private company, News Limited. Murdoch then had full control as Chairman and CEO of Global Media Holding Company News Corporation, the world's second-largest media conglomerate, and its successors, News Corp and 21st Century Fox, after the conglomerate split on 28 June 2013.[2][3][4][5]

In the 1950s and 1960s, Murdoch acquired a number of newspapers in Australia and New Zealand, before expanding into the United Kingdom in 1969, taking over the News of the World, followed closely by The Sun. Murdoch moved to New York City in 1974, to expand into the U.S. market; however, he retained interests in Australia and in Britain. In 1981, Murdoch bought The Times, his first British broadsheet, and became a naturalised U.S. citizen in 1985 to satisfy the legal requirement for U.S. television ownership.[6]

Murdoch has six children.[7] His eldest child, Prudence MacLeod, was appointed on 28 January 2011 to the board of Times Newspapers Ltd, part of News International, which publishes The Times and The Sunday Times.[8] Murdoch's eldest son Lachlan, formerly the deputy chief operating officer at the News Corporation and the publisher of the New York Post, was Murdoch's heir apparent before resigning from his executive posts at the global media company at the end of July 2005.[7] Lachlan's departure left James Murdoch chief executive of the satellite television service British Sky Broadcasting since November 2003, as the only Murdoch son still directly involved with the company's operations, though Lachlan has agreed to remain on the News Corporation's board.[9] 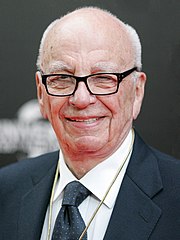