She was born at 532 Ocean Avenue in Jersey City.

She was baptized on September 22, 1893 at Saint Paul the Apostle Parish, Jersey City, New Jersey

She died in 1989 in Yonkers, Westchester County, New York and was buried in Long Island National Cemetery. 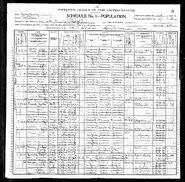 1900 US census
Add a photo to this gallery
Retrieved from "https://familypedia.wikia.org/wiki/Katherine_Agnes_McLaughlin_(1893-1989)?oldid=1515377"
Community content is available under CC-BY-SA unless otherwise noted.