Judah (Hebrew: יְהוּדָה‎, Standard Yəhuda Tiberian Yehuḏā) was, according to the Book of Genesis, the fourth son of Jacob and Leah, the founder of the Israelite Tribe of Judah. By extension, he is indirectly eponymous of the Kingdom of Judah, the land of Judea and the word "Jew".

According to the narrative in Genesis, Judah with Tamar is the patrilinear ancestor of the Davidic line. The Tribe of Judah figures prominently in the Deuteronomistic history, which most scholars agree was reduced to written form, although subject to exilic and post-exilic alterations and emendations, during the reign of the Judahist reformer Josiah from 641-609 BC.[2]

Judah has three sons by a Canaanite woman—Er and Onan are slain by the Lord—Tamar, disguised as a harlot, bears twins by Judah. (See Genesis Ch 38).

12 And the sons of Judah; Er, and Onan, and Shelah, and Pharez, and Zerah: but Er and Onan died in the land of Canaan. And the sons of Pharez were Hezron and Hamul.
Genesis 46:12 - KJV translation

3 ¶ The sons of Judah; Er, and Onan, and Shelah: which three were born unto him of the daughter of Shua the Canaanitess. And Er, the firstborn of Judah, was evil in the sight of the Lord; and he slew him.
4 And Tamar his daughter in law bare him Pharez and Zerah. All the sons of Judah were five.
5 The sons of Pharez; Hezron, and Hamul.
6 And the sons of Zerah; Zimri, and Ethan, and Heman, and Calcol, and Dara: five of them in all.
7 And the sons of Carmi; Achar, the troubler of Israel, who transgressed in the thing accursed.
8 And the sons of Ethan; Azariah.
9 The sons also of Hezron, that were born unto him; Jerahmeel, and Ram, and Chelubai.
10 And Ram begat Amminadab; and Amminadab begat Nahshon, prince of the children of Judah;
11 And Nahshon begat Salma, and Salma begat Boaz,
12 And Boaz begat Obed, and Obed begat Jesse,
1 Chr 2:3-12 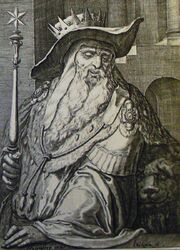