Jotham or Yotam (Hebrew: יוֹתָם‬, Modern Yōtam, Tiberian Yōṯam, meaning "God is Honest" "; Greek: Ιωαθαμ, translit. Ioatham; Latin: Joatham) was a king of Judah, and son of Uzziah by Jerusha, daughter of Zadok. Jotham was 25 when he began his reign, and reigned for 16 years. Edwin R. Thiele concluded that his reign commenced as a coregency with his father, which lasted for 11 years. Because his father Uzziah was afflicted with tzaraas after he entered the Temple to burn incense, Jotham became governor of the palace and the land at that time, i.e. coregent, while his father lived in a separate house as a leper.

Jotham inherited a strong government, well officered and administered. He is recorded as having built the Upper Gate of the Temple of Jerusalem. "He built cities in the mountains of Judah, and in the forests he built castles and towers."[5]

2 Kings mentions that Jotham fought wars against Rezin, king of the Arameans, and Pekah, king of Israel (15:37). He also defeated the Ammonites, who paid him an immense annual tribute. But the increasing corruption of the northern kingdom began to permeate Judah.[5]

The Gospel of Matthew lists Jotham of Judah in the genealogy of Jesus. The archeologist Nelson Glueck found an imprint of king Jotham near Eilat. Also near Eilat there is a wadi called "Yatam wadi." 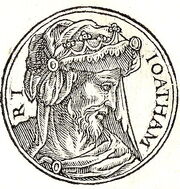