Joseph Vissarionovich Stalin (born Ioseb Besarionis dzе Djugashvili; 18 December 1878  – 5 March 1953) was the Premier of the Soviet Union from 6 May 1941 to 5 March 1953. He was among the Bolshevik revolutionaries who brought about the October Revolution in Russia in 1917 and later held the position of General Secretary of the Communist Party of the Soviet Union's Central Committee from 1922 until his death in 1953. While the office of the General Secretary was officially elective and not initially regarded as the top position in the Soviet state, Stalin managed to use it to consolidate more and more power in his hands after the death of Vladimir Lenin in 1924 and gradually put down all opposition groups within the Communist Party. This included Leon Trotsky, a socialist theorist and the principal critic of Stalin among the early Soviet leaders, who was exiled from the Soviet Union in 1929. Whereas Trotsky was an exponent of world revolution, it was Stalin's concept of socialism in one country that became the primary focus of Soviet politics.

In 1928, Stalin replaced the New Economic Policy of the 1920s with a highly-centralised command economy and Five-Year Plans that launched a period of rapid industrialization and economic collectivization in the countryside. As a result, the USSR was transformed from a largely agrarian society into a great industrial power, the basis for its emergence as the world's second largest economy after World War II.[1] As a result of the rapid economic, social and political changes of the Stalinist era, millions of people were sent to penal labor camps,[2] and millions were deported and exiled to remote areas of the Soviet Union.[2] The initial upheaval in the agricultural sector disrupted food production in the early 1930s and contributed to the catastrophic Soviet famine of 1932–1933. In 1937–38, a campaign against alleged enemies of the Stalinist regime culminated in the Great Purge, a period of mass repression in which hundreds of thousands of people were executed, including Red Army leaders convicted of participating in plots to overthrow the Soviet government.[3]

In August 1939, after the failure to establish an Anglo-Franco-Soviet Alliance,[4] Stalin's USSR entered into a non-aggression pact with Nazi Germany that divided their spheres of influence in Eastern Europe. This pact allowed the Soviet Union to regain some of the former territories of the Russian Empire in Poland, Finland, the Baltics, Bessarabia and northern Bukovina during the early period of World War II. After Germany violated the pact by invading the Soviet Union in 1941 and opening an Eastern Front, the Soviet Union joined the Allies. Despite heavy human and territorial losses in the initial period of war, the Soviet Union managed to stop the Axis advance in the battles of Moscow and Stalingrad. Eventually, the Red Army drove through Eastern Europe in 1944–45 and captured Berlin in May 1945. Having played the decisive role in the Allied victory,[5][6] the USSR emerged as a recognized superpower after the war.[7]

Stalin headed the Soviet delegations at the Yalta and Potsdam Conferences, which drew the map of post-war Europe. Communist-dominated leftist governments loyal to the Soviet Union were installed in the Eastern Bloc satellite states as the USSR entered a struggle for global dominance, known as the Cold War, with the United States and NATO. In Asia, Stalin established good relations with Mao Zedong in China and Kim Il-sung in North Korea, and the Stalin-era Soviet Union in various ways served as a model for the newly-formed People's Republic of China and Democratic People's Republic of Korea.

In power until his death in 1953, Stalin led the USSR during the period of post-war reconstruction, marked by the dominance of Stalinist architecture. The successful development of the Soviet nuclear program enabled the country to become the world's second nuclear weapons power. The Soviet space program was started as spin-off of the nuclear project. In his last years, Stalin also launched the so-called Great Construction Projects of Communism and the Great Plan for the Transformation of Nature.

Following his death, Stalin and his regime have been condemned on numerous occasions, the most significant of these the 20th Congress of the Communist Party of the Soviet Union in 1956, when Stalin's successor Nikita Khrushchev denounced his legacy and drove the process of de-Stalinization of the Soviet Union. Modern views of Stalin in the Russian Federation remain mixed, with some viewing him as a tyrant[8] others as a capable leader.[9] 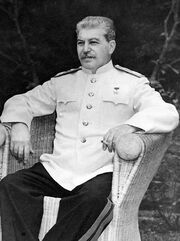