Edit Facts
Joseph Harrison was the eldest known child of Thomas and Ann Harrison, was born on June 2, 1860 in Cockfield, Durham, England. He grew up in Cockfield, and learned the trade of a coal miner like his father. Joseph married Sarah Jane Raisbeck, daughter of John Raisbeck and Phoebe Bell, about 1880 in Auckland, Durham, England. Their first two children were born in England (John and Phoebe), while their other children were born in Pennsylvania. Before immigration, Joseph and Sarah were living in Middlestone and Joseph worked as a coal miner. It was in this location that they are listed, in the 1881 English Census.

According to his passport application of 1920, Joseph Harrison departed from Liverpool, England on the S.S. City of Berlin and arrived in New York. He gives the date of August 14, 1884, but it is not clear whether this was his date of departure or his date of arrival. There is a Joseph Harrison listed on a City of Berlin ship manifest earlier in the year, traveling alone. Joseph, Sarah, and their children were living in Pennsylvania by 1886, when their third child was born.

The Harrisons settled in Elk County, Pennsylvania where they rented a home. In the 1900 census, they lived in Benzinger township and Joseph's occupation is listed as a day laborer. It is not clear what industry he worked. On his passport application, Joseph lists St. Marys (Elk County) and DuBois (Clearfield County) as places he lived between 1884 and 1920. Joseph, Sarah, and their family are recorded in the 1910, 1920, and 1930 Census in Sandy, Clearfield County, Pennsylvania. Sandy is a community located just south of downtown DuBois. On April 19, 1920, Joseph applied for a passport application, for the purpose of traveling to England to do business. It is not known if Joseph ever went to England after he received his passport. Joseph worked as a coal miner for most of his life, up until the 1920s, when he became a watchman at a spring works. 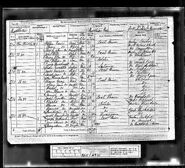