He was the Republican candidate for the U.S. 2008 Presidential election. 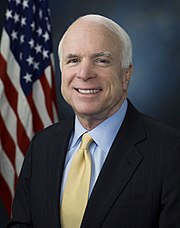