Familypedia
Register
Don't have an account?
Sign In
Advertisement
in: Langan (surname), Born in 1860, Died in 1930, Non-SMW people articles

His father and his siblings moved back to Ireland around 1865. John and a few other siblings came back to the United States around 1880, and they lived in Jersey City.

In the year 1900 they were living at 818 Garfield Avenue, Jersey City, Hudson County, New Jersey and from at least 1922 till his death they lived at 288 Ege Avenue in Jersey City.

On Sunday, April 6, 1930, John beloved husband of Catherine Langan (nee Devaney), and father of Daniel, James, Anna, Charles, and Bernard Langan. Relatives and friends, also Holy Name Society of Our Lady of Victories Church, are invited to attend the funeral from residence 288 Ege Avenue, on Thursday, 9 am. Thence to Our Lady of Victories Church where solemn high mass of requiem will be offered for the happy repose of his soul. Arrangements by James M. Houghton.

1860 US Census with John Langan 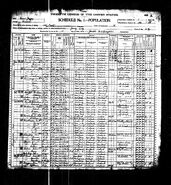 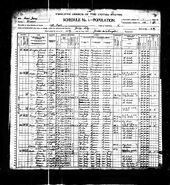