Familypedia
Register
Don't have an account?
Sign In
Advertisement
in: Houston (surname), Born in 1690, Died in 1754,
and 2 more

The famous Sam Houston was the fifth son of Major Samuel Houston and Elizabeth Paxton. Houston's paternal ancestry is often traced to his great-great grandfather Sir John Houston, who built a family estate in Scotland in the late seventeenth century. His second son John Houston emigrated to Ulster, Ireland during the Ulster plantation period. Under the system of primogeniture, he did not inherit the estate. A historic plaque near Larne in County Antrim, Northern Ireland tells the story of the Houston family. It is located in Ballyboley Forest Park near the site of the original John Houston estate.

After several years in Ireland, John Houston immigrated in 1735 with his family to the North American colonies, where they first settled in Pennsylvania. Houston decided to migrate south with other Scots-Irish, who settled in the back country of lands in the Shenandoah Valley of Virginia.[1] Scots-Irish newcomers included the Lyle family of the Raloo area who helped found Timber Ridge Presbyterian Church, and the Houston family settled nearby. Gradually, John Houston developed his land and purchased slaves.[1] His son Robert inherited his land, and the youngest of Robert's five sons was Samuel Houston.

Samuel Houston became a member of Morgan's Rifle Brigade and was commissioned a major during the American Revolutionary War. At the time, militia officers were expected to pay their own expenses. He had married Elizabeth Paxton and inherited his father's land, but he was not a good manager and got into debt, in part because of his militia service.[2] Their children were born on his family's plantation near Timber Ridge Church, including Sam Houston on March 2, 1793, the fifth of nine children and the fifth son. The senior Samuel and Elizabeth's children were Paxton (b. 1783), Robert (b. 1787), James (b. 1788), John Paxton (b. 1790; first clerk of Izard County, Arkansas, 1819–1838), Samuel (b. 1793), William (b. 1794), Isabella (b. 1796), Mary Blair (b. 1797), and Elizabeth Ann (b. 1800). Today, Timber Ridge Plantation maintains a log building which tradition claims was constructed from logs salvaged from the Sam Houston birthplace cabin.[3]

Planning to move on and leave debts behind, the elder Samuel Houston patented land near relatives in Maryville, the county seat of Blount County, Tennessee. He died in 1807 before he could complete the move, which Elizabeth subsequently undertook, along with their five sons and three daughters. She took them to the eastern part of the new state, which had been admitted to the Union in 1796.[1]

Taken from Houston, 1882:7 et seq. The following quotation is exerpted from different passages of Houston 1882, as the information about John Houston (c1680-?) was placed at several different points in the original, with considerable repetition.

The following is copied from a manuscript found among the papers of Rev. Samuel Houston, of Rockbridge County, Va, the father of the writer:

John Houston, my grandfather came from Ireland with is family when my father was nine years of age, about seventeen hundred and thirty-five (1735), bringing with him his mother, and wife, and all his childrn excepting the oldest son (James), who had received an education and was studing divinity, but died soon after the family left him of consumption.

My grandfather's children [excepting James] were as follows:

He remained after landing, in Pennsylvania, until his three oldest chilren were married; then removed to Virginia, and settled on 'Burden's Land;' and, with his son (and son-in-law-, John Montgomery), was a principal founder of the congregation of 'New Providence' to which he gave the name. In the cemetery of the dame, his mother, aged nienty seven (97), his wife, and himself, with several of his descendants, lie entombed.

My grandfatherwas killed by a limb falling from a burning tree, as he walked under it, which with its point foremost, penetrated his skull, and in a moment dispatched his life."

My mother (her maiden name was Todd), died in seventeen hundred and ninety-five (1795), and was buried near Maryville, Blount County. My father died in Kentucky, and was buried in a churchyard near Whipperwill Creek, Logan County.

John Houston...emigrated to America about the year seventeen hundred and thrity-five (1735). Some of the company of those who came with him, haveing a considerable amount of money with them, and believeing from the donduct of the captain and crew of the vessel in which they sailed, that they designed robbing and murdxdering them, held a consultation, and determined to seize, and put in irons, the whole number. This they did; and some of the emigrants being skilled in navigation, took command of the ship, and after a sail o eight days, theywere all safely landed in the port of Philadelphia.

...the Houstons settled, when they removed fro Pennsylvania, in Virginia, on what was then known as the "Burden Tract", between the years seventeen hundred and forty-two, and fifty (1742-50).

His house stood near the place where "Old Providence Church" now stands. In its immediate vicinity the settlers erected a stockade fort, for their defense, in the case of invasion by the Indans. The father of the writer remembered having seen this fort when he was a boy (as early as 1760-1765), and having heard most thrilling accounts of the alarms and, not unfrequently (sic) of the curel massacres to which the early settlers were subjected from the inroads and assaults of the Indians.

John Houston was one of the first elders of the New Providence Church, and seems to have had a controlling influence over the people, as may be inferred from his success in removing the difficulties which attended the locating of their church edifice. Rev. Samuel Houston, a grandson, gives an account of this in a letter about the year 1820 to Rev. James Morrison, a former paster of the church.

Nothing...could be done in the way of building until the questsion of location should be settled. Several ineffectual meetngs were held. At last many became alarmed, lest it should end like the tower of Bable. Another meeting, however, was called, at which my grandfather attended, and he employed such conciliatory argument as brought the stiff to yield and to agree to the site where the church now stands. After agreement, it was propsed to give the church a name. My aged ancestor said: 'Neighbors, we have heretofore had unpleasant and fruitless meetings; but to-day, we have had an agreeable and successful one. We are indebted to Divine Providence for it. Let us call the Church Providence.' To this all assented.

(There is another origin of the name given by some, but the above seems to be the true one.)

The following is based on Houston, 1882 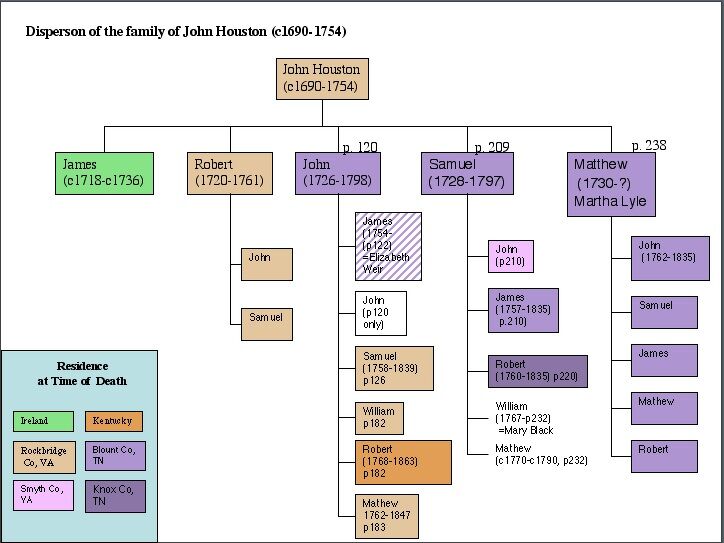