Familypedia
Register
Don't have an account?
Sign In
Advertisement
in: Borland (surname), Born in 1924, Died in 1986,
and 2 more

John Borland is best described, ethnically, as a descendant of a sprawling tree of Ohio pioneers and early Ohio settlers. John's ancestors are generally of Germanic descent (including Scottish, German, Dutch, English, Norwegian and Swiss nationalities), although a few appear to be of Celtic (Welsh and Irish) and Italic (French) descent.

John was the son of Weldon Earl Borland (1906-2002) and Elizabeth Marie Forbes (1905-1983). John's mother Elizabeth worked at the W.B. Penn Company. Penn's sold shoes and clothing. The store is now abandoned, but it was situated in Bowerston, Monroe Township, Harrison County, Ohio, across the street from the J.C. Borland Wholesale and Retail store owned by Weldon's family. The Bowerston public library now stands where the Borland store (and house) was located.

John's parents were married briefly. With respect to his first name, he was likely named after Elizabeth's only brother John Price Forbes. The middle name Earl was passed down from his father Weldon, who in turn was named for his maternal uncle, Earl Smith Miller (1879-1942).

John was raised by his mother and resided with her on the Forbes farm in New Hagerstown, Orange Township, Carroll County, Ohio. The farm was owned by Elizabeth's parents Francis Morrison Forbes (1869-1945) and Pearl Beatrice Price (1874-1940), aka Dolly. The farm house is still standing, and it was erected by Francis's father John C. Forbes. In his youth, John was very close to his first cousin and best friend Patricia A. Forbes (daughter of his uncle John Price Forbes and Ethel Trimmer). Pat described the relationship as akin to that of brother and sister. John played the trombone. He graduated from high school in 1942.

John Earl Borland joined the Navy prior to 1944, and was a veteran of World War II.

While stationed near Jersey City, he met and later married Helen Eloise Freudenberg (1928-1989). Helen was pregnant with a child fathered by Edward J. Ganley II (1919-1987), the son of the local fruit peddler. John took Helen home to Leesville, Carroll County, Ohio where she had the child. She registered the birth under the name of her sister, Selma. That child was Michael Joseph Borland (1947). John had two sons of his own with Helen as well. Later he and Helen divorced.

Helen and John lived on Grace Street in Jersey City, New Jersey. John worked for the Ballantine Beer Company. He enjoyed outdoor barbecues and he nearly always had multiple dogs as pets.

John married Geraldine Marie Winblad (1928- ). Geraldine was the cousin of Helen Eloise Freudenberg. During the earlier part of their marriage, John and Geraldine lived in Jersey City, and then for a brief time on Staten Island, New York, where in addition to two dogs, they kept one cat. John and Geraldine moved to Leesville, Carroll County, Ohio, and resided in the house he inherited from his deceased mother. The house was built by Brice J. Tripp (1890-1971), Elizabeth Forbes' second husband. (Bryce had several fingers missing that he sawed off working with wood). John had hoped to live out his retirement in the quiet rural neighborhood he enjoyed as a child, Leesville being only a 5 mile drive from New Hagerstown. He also enjoyed visiting the Ohio Swiss villages and cheese houses around Holmes County, Ohio, and took frequent trips, especially when he had visiting family members. Unfortunately, only a few years after relocating, he was diagnosed with an incurable cancer.

Part of John's inheritance from his mother was a Cutlass Supreme. John was involved in an automobile accident towards the end of his life. Geraldine was driving the vehicle and John was the front seat passenger. Fortunately, Geraldine was not seriously injured, and John suffered a minor head injury which quickly healed. It is at this hospital visit, in Canton, Ohio, when John was diagnosed with lung cancer. When John was in the hospital, the nurse told him there was another Borland in another room, and asked if he knew him. It was John's father, Weldon. At first he didn't want to talk to him, but his children convinced him to talk to his father. John died in the hospital a few months later. He was visited by all three of his children. Weldon, who outlived his son by nearly an entire generation, expressed on numerous occasions how he had wished he had a relationship with John, and regularly visited John's grave leaving flowers.

After John died, Geraldine moved to Bayonne, New Jersey, then to Florida, and finally to Tuscarawas County, Ohio.

John was buried in Leesville Cemetery. A World War II veteran plaque commemorates his service. The headstone bears the names of both John and Geraldine.

1961 circa Borland home at 182 Grace Steet in Jersey City 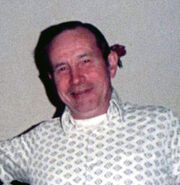 1980 circa with Geraldine Borland and son-in-law Greg Smith