John Bourchier, born about 1467, was the only son of Sir Humphrey Bourchier (d.1471) and Elizabeth Tilney (d.1497), the daughter and sole heir of Sir Frederick Tilney of Boston, Lincolnshire. Through his father, Bourchier was descended from King Edward III; his great-grandmother, Anne of Gloucester, was the daughter of Thomas of Woodstock, King Edward's youngest son.

After his father was slain fighting on the Yorkist side at the Battle of Barnet in 1471, Bourchier became a ward of John Howard, 1st Duke of Norfolk. As noted above, Bourchier's mother, Elizabeth, had married as her second husband Thomas Howard, the eldest son and heir of Bourchier's guardian by his first wife, Katherine Moleyns. In 1474 Bourchier's grandfather, John Bourchier, 1st Baron Berners, died, and Bourchier inherited the title at the age of seven.

He was educated at Oxford University.

Bourchier held various offices of state, including Lieutenant of Calais from 28 November 1520 and Chancellor of the Exchequer from 14 July 1524 that of to King Henry VIII.

He translated, at the King's desire, Froissart's Chronicles (1523–1525), in such a manner as to make a distinct advance in English historical writing, and the Golden Book of Marcus Aurelius (1534), as well as The History of Arthur of Lytell Brytaine (Brittany), and the romance of Huon of Bordeaux.

Before 13 May 1490 Bourchier married his step-father's half-sister, Katherine Howard, the daughter of John Howard, 1st Duke of Norfolk, by his second wife, Margaret Chedworth, daughter of Sir John Chedworth, and by her had a son and three daughters: 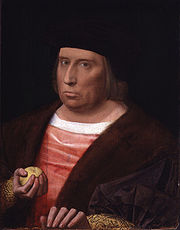