Together they had the following children:

She was buried on July 4, 1912 in Mount Olive Cemetery, Chicago, Illinois. She is in Section E and Lot 129. She is buried with Leopold Barca, Anna M. Jensen, Lena Jensen, and Andrew Havig Jensen. Missing from the cemetery is Steffan Barca, her husband.

1896 Chicago directory with Katrine as "Katherine" and a widow 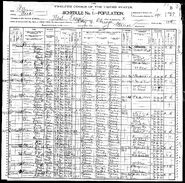 Retrieved from "https://familypedia.wikia.org/wiki/Johanna_Katrine_Jensen_(1856-1912)?oldid=1015695"
Community content is available under CC-BY-SA unless otherwise noted.