Jesse worked for the post office and he travelled on a train as a clerk postmarking the mail. He would travel from Chicago to Kansas City and back again on the Illinois Central Railroad.

In 1930 the family was living at 1611 Myott S. Sherman [sic] Street in Rockford, Winnebago County, Illinois and they owned their own house valued at $6,250. In 1930 Harry Garrett Clay, his son, had a newspaper route. After Jesse's wife died in 1971 Jesse lived with his grandson David George Clay until his death. 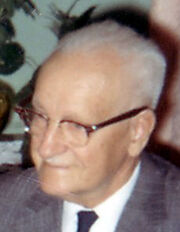