Jens' father died in 1864 and the remainder of the family appears in the 1865 Norway Census living in Farsund.

The family appears in the 1900 United States Census living in Chicago. In 1900 they had seven children with three living, and had been married for 17 years. Jens is working in a brass foundry.

He died on May 29, 1902 according to the Illinois Death Index and his death certificate was number 9162. Arthur Bruce Jensen II (1939- ) says: "Jens may have died while working in a steel mill where he was overcome by fumes." He was buried in Mount Olive Cemetery.

Jens J. Jensen. Came to America in 1881 from Norway where he was born in Farsund, Mandals and Listers Amt, in 1859, and having been reared and confirmed in the Lutheran faith, was converted in Stavanger in 1877 where he united with the Methodist church, and on coming to Chicago, united with the 1st Norsk-Dansk Methodist Episcopalian church in 1886 transferring to Maplewood Avenue church where he is now chorister; has been trustee for many years, and was formerly S.S. superintendent. His wife, Anna (Olsen), of the same nativity, came with her parents, Soren and Anna Olsen, whose record appears in this volume, to America in 1871, was here converted and is a member of the Ladie's Society of the Maplewood Avenue church. Their children are Jens Arthur and John Sydney, two others Jens Jacob and John Sydney having died in infancy. Mr. Jensen's father, Jens Jacob Hansen, who passed away in Norway in 1864, an adherent of the Lutheran faith, was a talented violinist, the entire family with one exception being musicians. His mother, Anna Marie (Kjarvaldsen) after her husband's death came to America in 1882 and passed away six years later, aged 63 years, having previously embraced the Methodist faith. Mr. Jensen at the age of 14 years left his home for a sailors life, which followed for 3 years, visiting France, Scotland and numerous other countries, on his return home was converted, and about four years later came to America, where he has been one of the most active workers in the Methodist church, also being a member of the Skalden, a musical society. 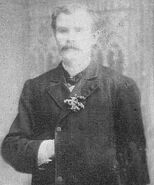 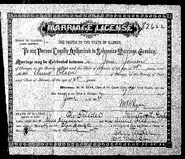 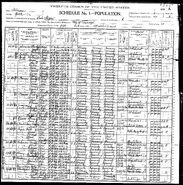 1902 death certificate
Add a photo to this gallery
Retrieved from "https://familypedia.wikia.org/wiki/Jens_Julius_Jensen_(1859-1902)?oldid=1015598"
Community content is available under CC-BY-SA unless otherwise noted.