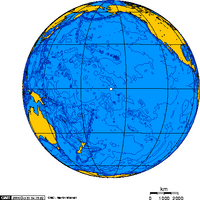 Jarvis Island (formerly also known as Bunker Island[1]) is an uninhabited 4.5 square kilometer coral island located in the South Pacific Ocean at 0°22′S 160°01′WCoordinates: 0°22′S 160°01′W , about one-half of the way from Hawaii to the Cook Islands. It is one of the Line Islands, in the central part of the group. It is an unincorporated territory of the United States, administered from Washington by the United States Fish and Wildlife Service of the United States Department of the Interior as part of the National Wildlife Refuge system.[2]

The climate is tropical, with scant rainfall, constant wind, and strong sun. Varying from sea level to seven meters (23 feet), the terrain is sandy, and the coral island is surrounded by a narrow fringing reef. Its sparse bunch grass, prostrate vines, and low-growing shrubs are primarily a nesting, roosting, and foraging habitat for seabirds, shorebirds, and marine wildlife.[2]

The island has no natural fresh water.[4]

For statistical purposes, Jarvis Island is grouped as one of the United States Minor Outlying Islands.

The island was discovered on August 21, 1821 by the British ship Eliza Francis, (or Eliza Frances), owned by Edward, Thomas, and William Jarvis[5][6] and named by her commander, one Captain Brown. The uninhabited island was claimed for the United States under the Guano Islands Act in March 1857 and formally annexed by the U.S. on 27 February 1858. The guano was to be sent back to the United States for use as fertilizer. For the next twenty one years Jarvis Island was mined continuously for guano. American business interests abandoned the island in 1879 after tons of guano had been removed.

The United Kingdom annexed the island on 3 June 1889, but never carried out plans for further exploitation. The guano deposits are not known to have been mined during this period.

U.S. President Franklin Roosevelt put the U.S. Department of the Interior in charge of the island on 13 May 1936, a situation that lasted until 27 June 1974.[2]

It was colonized by the U.S. 26 March 1935 – 7 February 1942 under authority of the two consecutive Heads of the Baker, Howland and Jarvis Colonization Scheme (see Baker Island). A Japanese submarine surfaced off the west coast of the Island at the beginning of World War II. Thinking it was a U.S. Navy submarine that was coming to remove them, the remaining colonists rushed to the shore. The colonists were shelled; but no one was hurt. The colonists were evacuated in February 1942.[7]

The Millersville settlement on the western side of the island was the location of several dwellings and a weather station from 1935, the year it was colonised, until World War II, when it was abandoned; it was reoccupied in 1957 during the International Geophysical Year by scientists, and shortly had its only proper local authority, Station Chief for IGY Homung (d. 1958) 1957 – Nov 1958, but was again abandoned in 1958.

Retrieved from "https://familypedia.wikia.org/wiki/Jarvis_Island?oldid=293150"
Community content is available under CC-BY-SA unless otherwise noted.