The family appears in the 1880 US Census living in Deerpark, Orange County, New York and Abner and Robert are already living on their own.

James C. Skinner, father of Robert Skinner passes away in Matamoras. James C. Skinner died at the home of his son, Robert Skinner, in Matamoras at 6:43 o'clock this morning after a long illness. Mr. Skinner was born at Port Orange on the 27th day of November, 1835. He was the only son of the late Abner C. Skinner and Mary Ann McKune. At one time he was the largest blue stone dealer in the Mamakating Valley. On July 3, 1856, he was united in marriage to Esther Snelling and lived on the farm inherited from his father, until he began work on the New York Division of the Erie Railroad in the capacity of fireman. He was a charter member of Deerpark Lodge No 1, B of L F, and was for many years a member of the Masonic order. When promotion came to him on the railroad, as it soon did, he refused to accept it and always acted as fireman. For the last 14 years he held a position in the Erie yards at 23rd and 28th Streets, New York City. A year ago this last winter a cancerous growth appeared on his lower lip, for which he was operated on at the hospital in Montclair, where he resided. It was considered successful at the time, but swelling soon developed under the chin and on the left side of face, which, after consultation with the best medical talent and two specialists, was also pronounced of a cancerous nature. Accompanied by his devoted wife he spent several months at the Wheeler Sanitarium at Cornwall-on-the-Hudson under the care of Dr. Wheeler, where everything was done to relieve him, but all to no avail. He grew gradually weaker and two weeks ago he was carefully and tenderly brought to the home of his son, where he passed away as stated above. Mr. Skinner was a genial, kindly man who made friends where ever he went, he was a kind father and an affectionate and devoted husband. When he knew that his condition was hopeless he expressed himself as ready and resigned, his only regret was in leaving the dear companion of almost 50 years to finish the journey of life alone. Had Mr. Skinner lived until the third of this coming July he and his wife would have celebrated their golden wedding, to which both had looked forward with pleasant anticipations. Besides his wife he leaves five children: Abner, of Port Jervis; Robert, of Matamoras; Algey, of Jersey City; Flora, wife of William Handkrim, of Middletown; and Grace, wife of Fred Balmos, of Montclair. Two girls died in infancy and Clarence, the youngest son, a few years ago. Mr. Skinner is also survived by two sisters, Mrs. Harry Piatt, of Cuddebackville, and Mrs. Thomas Wood, of Montclair, beside several grandchildren and three great-grandchildren. The funeral will be in charge of the B of L F and will take place at the house on Friday afternoon at one o'clock and at the church in Cuddebackville at three o'clock. The interment will be in Cuddebackville Cemetery. 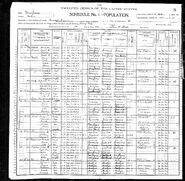 1900 US census
Add a photo to this gallery
Retrieved from "https://familypedia.wikia.org/wiki/James_C._Skinner_(1836-1906)?oldid=869506"
Community content is available under CC-BY-SA unless otherwise noted.