On April 17, 1853 he was baptized under the name "Jakob Elias Williamsen" at Fede parish, Kvinesdal, Vest Agder, Norway.

All were born in Fede, Kvinesdal, Vest-Agder, Norway:

Jacob had a total of eight children, with seven living by the year 1900:

His son Ole M. Williamson emigrated to Minnesota in 1897. Jacob came to the United States with his wife and the remaining children in June of 1899.

In 1900 he was living in Deerwood, Kittson County, Minnesota. He was indexed in the census under the name "Jacob Wilkemson". He had a total of eight children with seven living in the year 1900. The children living at home were: "Alfred"; Jacob; Maria; Emil; and Jennie. Jacob was working as a day laborer.

Jakob moved back to Norway after his wife died and he took Jenny C. Williamson with him.

Jacob had cousins that emigrated to the US.

These were descendants of his uncle, Peder Andreas Pedersen (1831-?): 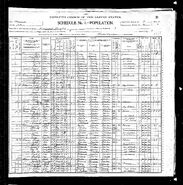 1910 census (closeup)
Add a photo to this gallery

Retrieved from "https://familypedia.wikia.org/wiki/Jakob_Elias_Willumsen_(1853-1928)?oldid=1458263"
Community content is available under CC-BY-SA unless otherwise noted.