Familypedia
Register
Don't have an account?
Sign In
Advertisement
in: Non-SMW people articles, Pedersen (surname), Born in 1882,
and 4 more

Inga was born on October 02, 1882. Her death certificate lists her birthday as "October 20, 1885". All the references to her in Norway list her year of birth as "1883". In the listing for her confirmation she is listed as "October 2, 1882" and this will be considered canonical.

Our Inga may be the "Inga Pedersen" in the 1900 Norway Census working as a "barnepige" at 8 Gyldenløvsgade in Kristiansand, Vest-Agder, Norway. The census lists her birth year as "1883" and her birth place as "Farsund".

She left Kristiansand, Vest-Agder, Norway on June 12, 1903 and listed her birth year as 1883 and her occupation as "tjenestepige", or maid. She was aboard the ship "Thingvalla" and she arrived in New York on June 27, 1903, entering in New York City under the name "Inga Pedersen". The trip took 16 days to cross from Kristiansand, Vest-Agder, Norway to New York City in the United States.

She returned from a trip to Norway on September 12, 1906 and listed her residence as "Jersey City".

They had two children:

Inga returned from a trip to Germany, via Southampton, Southamptonshire, England, on July 16, 1908 aboard the ship "Deutschland". She listed her homeland as Farsund, Norway and both her and her husband's height as 5 feet and 8 inches and their eyes were blue.

Their address was 108 4th Avenue in New York City and she said that she previously entered the US in the year 1900.

"A little parcel to you from sister, stay well. Our most beloved dear Salmine and family, now when Sofie shall travel on Saturday, she will be kind and go to you and bring regards from your dear father and sister, I have no address, as I get the letters in return, got a letter from Lina 8 days ago, she is good and sound and has visited you, sister, and she said you were in good mood and happy, yes God helps you and your people, so that you still may come to see your old father he is pretty well and was glad he heard that Lina think about a trip home, together with you if everything goes well, with the help of God, we live well, have no suffer. Marie Klungeland is a candidate for confirmation October 6th. You John get regards from Malla Bekkevig Liva mm (with more). Dear, be careful so that you once again can see old Norway. Lina wrote that she had a good time by Inga it was so nice, we have had a cold summer so we have had [the] fire in the stove all the time, you shall get letters when I get [back]. Love from father [and] sister."

Inga was living at 171 Manhattan Avenue in Jersey City when she was hospitalized on December 19, 1927.

She died of "double bronchiopneumonia" with "cirrhosis of the liver". She had been a heavy drinker.

Inga's funeral notice was published in the Jersey Journal of Jersey City on December 28, 1927.

She was buried in Fairview Cemetery on December 29, 1927 in Fairview, New Jersey.

After Inga's death, Emil remarried and had one more child.

Her son, Eddie, set the transcontinental air speed record in his age category in 1930, three years after her death. 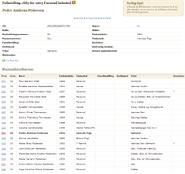 1910 US census in Manhattan 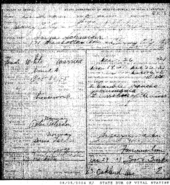 This article was created by Richard Arthur Norton (1958- ).