Henry Manwaring was a convert to The Church of Jesus Christ of Latter-day Saints. He was born in England, and after his conversion immigrated to the United States and settled in Springville, Utah. Springville is the city south of Provo, in Utah County, near Lake Utah. 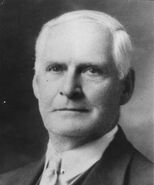 My family, Henry and Sarah Manwaring, Left England in 1871. They first sent Herbert, their oldest son, when he was seventeen years old across the ocean to earn enough money to bring the rest of the family over. It took him five years. During this time Henry's father John Manwaring passed away, leaving the family some money. So after they sold their belongings, they left by ship for America. They then travelled to Salt Lake City, Utah by steamship and then train. Soon after arriving in Salt Lake, Henry and his daughter Mary, age 13, became ill with mountain fever. Mary died but Henry recovered. Mary is buried in Potters Field in Salt Lake City.

While in Salt Lake, Herbert worked at Cottonwood, and George(Author of "Oh How Lovely Was the Morning")worked at Teasdale Dry Goods store. After Living in Salt Lake for a year they moved to Springville, Utah. Their they lived at 222 East and 400 South. It was a two room house, one of log and the other of lumber.

Henry and Sarah are both buried in the Springville City Cemetery.

Henry had Sarah had the following children:

Death of Henry Manwaring: Veteran Passes Away in His Seventy-Sixth Year Special Correspondence. Springville, Utah Co., March 27--On March 25, at 5 o'clock p.m., Henry Manwaring departed this life at the age of 75 years, 1 month and 15 days, surrounded by his family. The immediate cause of his death was a cancerous growth of the bowels and stomach. Brother Manwaring was the son of John and Ellen Bratt Manwaring, and was born Feb. 10, 1827, as Sandbach, Cheshire, England. In the year 1861 he was baptized a member of the church of Jesus Christ, and a few years after emigrated to Zion, and has been a resident of Springville over 30 years. He leaves a wife, five sons, 34 grandchildren and five great grandchildren to cherish his memory. All who knew Brother Manwaring knew him as a God-fearing man, with "charity for all and malice for none," and was exemplary as a churchman and citizen, with qualities of head and heart that endeared him to all who knew him. While he never aspired to lofty places, he was always attentive to duty whenever or wherever called. He was a kind and devoted husband and father, true friend and good neighbor, and took great comfort in the fact that all his descendants are members of the Church. The funeral services over the remains were held at Latter-Day Saints' church at 2 p.m., Bishop Maycock presiding. Choir rendered appropriate music and prayer was offered by Elder Wm. Clegg. A short sketch of the life of deceased was given by A. J. Southwick. Words of praise for the departed and consolation for the family were offered by Elders C. D. Evans and B. T. Blanchard, and benediction was pronounced by Willas Strong. At the grave dedicatory prayer was offered by A. J. Southwick. Copied from http://freepages.genealogy.rootsweb.com/~schick/manwaring/henryobit.htm