Familypedia
Register
Don't have an account?
Sign In
Advertisement
in: Plantagenet (surname), Born in 1133, Died in 1189,
and 22 more

King of England
Lord of Ireland, Duke of Normandy and Aquitaine
Count of Anjou and Maine

Henry II, born in 1133, was invested as Duke of Normandy in 1150. The next year, he succeeded his father as Count of Anjou and Maine. His marriage in 1152 gave him control of the Duchy of Aquitaine. In 1154 he succeeded Stephen as King of England, and in 1171 took the additional title of Lord (Dominus) of Ireland.

Henry II, first of the Angevin kings, was one of the most effective of all England's monarchs. He came to the throne amid the anarchy of Stephen's reign and promptly collared his errant barons. He refined Norman government and created a capable, self-standing bureaucracy. His energy was equaled only by his ambition and intelligence. Henry survived wars, rebellion, and controversy to successfully rule one of the Middle Ages' most powerful kingdoms.

Henry was raised in the French province of Anjou and first visited England in 1142 to defend his mother's claim to the disputed throne of Stephen. His continental possessions were already vast before his coronation: He acquired Normandy and Anjou upon the death of his father in September 1151, and his French holdings more than doubled with his marriage to Eleanor of Aquitane (ex-wife of King Louis VII of France). In accordance with the Treaty of Wallingford, a succession agreement signed by Stephen and Matilda in 1153, Henry was crowned in October 1154. The continental empire ruled by Henry and his sons included the French counties of Brittany, Maine, Poitou, Touraine, Gascony, Anjou, Aquitane, and Normandy. Henry was technically a feudal vassal of the king of France but, in reality, owned more territory and was more powerful than his French lord. Although King John (Henry's son) lost most of the English holdings in France, English kings laid claim to the French throne until the fifteenth century. Henry also extended his territory in the British Isles in two significant ways. First, he retrieved Cumbria and Northumbria from Malcom IV of Scotland and settled the Anglo-Scot border in the North. Secondly, although his success with Welsh campaigns was limited, Henry invaded Ireland and secured an English presence on the island.

English and Norman barons in Stephen's reign manipulated feudal law to undermine royal authority; Henry instituted many reforms to weaken traditional feudal ties and strengthen his position. Unauthorized castles built during the previous reign were razed. Monetary payments replaced military service as the primary duty of vassals. The Exchequer was revitalized to enforce accurate record keeping and tax collection. Incompetent sheriffs were replaced and the authority of royal courts was expanded. Henry empowered a new social class of government clerks that stabilized procedure - the government could operate effectively in the king's absence and would subsequently prove sufficiently tenacious to survive the reign of incompetent kings. Henry's reforms allowed the emergence of a body of common law to replace the disparate customs of feudal and county courts. Jury trials were initiated to end the old Germanic trials by ordeal or battle. Henry's systematic approach to law provided a common basis for development of royal institutions throughout the entire realm.

The process of strengthening the royal courts, however, yielded an unexpected controversy. The church courts instituted by William the Conqueror became a safe haven for criminals of varying degree and ability, for one in fifty of the English population qualified as clerics. Henry wished to transfer sentencing in such cases to the royal courts, as church courts merely demoted clerics to laymen. Thomas Beckett, Henry's close friend and chancellor since 1155, was named Archbishop of Canterbury in June 1162 but distanced himself from Henry and vehemently opposed the weakening of church courts. Beckett fled England in 1164, but through the intervention of Pope Adrian IV (the lone English pope), returned in 1170. He greatly angered Henry by opposing to the coronation of Prince Henry. Exasperated, Henry hastily and publicly conveyed his desire to be rid of the contentious Archbishop; and four ambitious knights took the king at his word and murdered Beckett in his own cathedral on December 29, 1170. Henry endured a rather limited storm of protest over the incident and the controversy passed.

Henry's plans of dividing his myriad lands and titles evoked treachery from his sons. At the encouragement - and sometimes because of the treatment - of their mother, they rebelled against their father several times, often with Louis VII of France as their accomplice. The deaths of Henry the Young King in 1183 and Geoffrey in 1186 gave no respite from his children's rebellious nature; Richard, with the assistance of Philip II Augustus of France, attacked and defeated Henry on July 4, 1189 and forced him to accept a humiliating peace. Henry II died two days later, on July 6, 1189.

A few quotes from historic manuscripts shed a unique light on Henry, Eleanor, and their sons.

From Sir Winston Churchill Kt, 1675: "Henry II Plantagenet, the very first of that name and race, and the very greatest King that England ever knew, but withal the most unfortunate . . . his death being imputed to those only to whom himself had given life, his ungracious sons. . ."

From Sir Richard Baker, A Chronicle of the Kings of England: Concerning endowments of mind, he was of a spirit in the highest degree generous . . . His custom was to be always in action; for which cause, if he had no real wars, he would have feigned . . . To his children he was both indulgent and hard; for out of indulgence he caused his son henry to be crowned King in his own time; and out of hardness he caused his younger sons to rebel against him . . . He married Eleanor, daughter of William Duke of Guienne, late wife of Lewis the Seventh of France. Some say King Lewis carried her into the Holy Land, where she carried herself not very holily, but led a licentious life; and, which is the worst kind of licentiousness, in carnal familiarity with a Turk."

Henry II is a double descendant of Charlemagne (747-814), 13th generation via his mother (with at least three longer lines through her) and 14th via his father.

His ancestors can be concisely referenced in text with {{h2e}}. 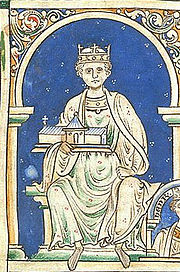