Familypedia
Register
Don't have an account?
Sign In
Advertisement
in: Eyring (surname), Born in 1901, Died in 1981,
and 24 more

Henry Eyring (February 20, 1901 – December 26, 1981) was a Mexican-born American theoretical chemist whose primary contribution was in the study of chemical reaction rates and intermediates.

A prolific writer, he authored more than 600 scientific articles, ten scientific books, and a few books on the subject of science and religion. He received the Wolf Prize in Chemistry in 1980 and the National Medal of Science in 1966 for developing the Absolute Rate Theory or Transition state theory of chemical reactions, one of the most important developments of 20th-century chemistry. Several other chemists later received the Nobel prize for work based on it, and his failure to receive the Nobel prize was a matter of surprise to many. The Royal Swedish Academy of Sciences apparently did not understand Eyring's theory until it was too late to award him the Nobel; the academy awarded him the Berzelius Medal in 1977 as partial compensation. Sterling M. McMurrin believed he should have received the Nobel Prize but was not awarded it because of his religion.

He was also elected president of the American Chemical Society in 1963 and the Association for the Advancement of Science in 1965.

Eyring, a third generation Mormon, was reared on a cattle ranch in Colonia Juárez, Chihuahua, a Mormon colony, for the first 11 years of his life. In July 1912, the Eyrings and about 4,200 other immigrants were driven out of Mexico by violent insurgents during the Mexican Revolution and moved to El Paso, Texas. After living in El Paso for approximately one year, the Eyrings relocated to Pima, Arizona, where Henry completed high school and showed a special aptitude for mathematics and science. He also studied at Gila Academy in Thatcher, Arizona, now Eastern Arizona College. One of the pillars at the front of the main building still bears his name, along with that of his brother-in-law, Spencer Woolley Kimball (1895-1985), later president and prophet of The Church of Jesus Christ of Latter-day Saints (LDS Church). Eyring's father was the last member of the LDS Church to practice polygamy, which he did until 1954 when one of his two wives died.

Eyring married Mildred Bennion (1896-1969). She was a native of Granger, Utah who had a degree from the University of Utah and served for a time as head of the physical education department there. She met Eyring while pursuing a doctorate at the University of Wisconsin. They had three sons together. 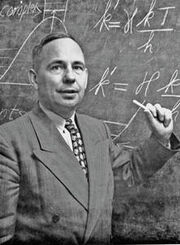