He was in a traffic accident on August 4, 1976. It was a rainy night and he was driving home in his Volkswagon Beetle. His car hit the blade of a bulldozer that was parked with the blade facing traffic and raised in the air. He died in the hospital on August 13, 1976.

Paterson News, Paterson, New Jersey, Saturday, August 14, 1976: "West Milford - Henry A. Dahl Jr., 38, of Macopin Road, died Friday morning at St. Joseph's Hospital in Paterson as a result of injuries suffered in an auto accident August 4. Born in Jersey City, he was a resident there before moving to this township four years ago. Mr. Dahl was employed as a field manager at IBM in Newark the past 17 years. A funeral service will be held Sunday at 4 p.m. at Our Saviour Lutheran Church in Pompton Plains. Interment will be Monday in Cedar Heights Cemetery. Surviving are his wife, Lynn; three sons, David, Craig, and Mark, and two daughters, Diana and Toni Lynn, all at home; his mother, Mrs. Edith Dahl of Waymart, PA; and two brothers, Karl of Jersey City, and Edward of Waymart, PA." 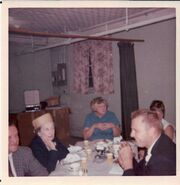 1970 circa
Add a photo to this gallery

Retrieved from "https://familypedia.wikia.org/wiki/Henry_Antone_Dahl_II_(1937-1976)?oldid=886743"
Community content is available under CC-BY-SA unless otherwise noted.