Harry was born in New York in 1876, although his birth certificate has not been found yet. His father Charles was the son of an immigrant from Strasbourg, Alsace-Lorraine, Germany/France who came to the US on his honeymoon.

In 1880 the Lindauers were living at 51 8th Street in Hoboken, Hudson County, New Jersey.

Charles moved the family to Rye, New York around 1900 and may have been involved with a hotel there. His mother Anna was born near Glen Cove or Stony Brook in the Oyster Bay area of Long Island.

Around 1910 Harry married Hannah Cecilia Shea (1884-?). After his death Hannah married John Foran (1887-?) of Ireland. he may be buried in GreenwoodUnion Cemetery.

On September 12, 1918 Harry senior filled out his draft card when he was working as a clerk at R.B. and W. Bolt Factory on Midland Avenue in Port Chester and living at 45 Eldrige Street.

In 1920 Harry was living at 38 Elm Place in neighboring Rye, New York with his family, and his sister Anna Lillian Lindauer, and his brother LeBaron Hart Lindauer, and he was still working as a clerk in the bolt factory.

Harry died in 1923 from "chronic valvular cardiac disease with syphilis". When and where he contracted syphilis, and whether he passed it to his wife is not known.

He was buried in Greenwood Union Cemetery, Rye, New York as are other of his family members. 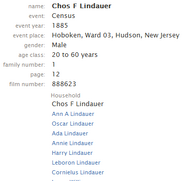 1923 Harry Chauncey Lindauer I (1876-1923) death certificate
Add a photo to this gallery
Retrieved from "https://familypedia.wikia.org/wiki/Harry_Chauncey_Lindauer_I_(1876-1923)?oldid=892714"
Community content is available under CC-BY-SA unless otherwise noted.