Gundaroo is a small village in the Southern Tablelands of New South Wales, Australia and in Yass Valley Council. It is situated to the east of the Yass River, about 16 kilometres (10 mi) north of Sutton, about 15 kilometres (9 mi) west of the Lake George range. At the 2016 census, Gundaroo "state suburb" (including surrounding areas) had a population of 1,146.[1] At the 2006 census, its "urban centre/locality" had a population of 331.[2]

The explorers Charles Throsby and Joseph Wild traveled through the Yass River valley in 1820. The Aborigines called the valley Candariro, meaning "blue crane". This name may have been the origin of Gundaroo,[3] or it may mean "big waterhole".[4] Governor Lachlan Macquarie granted the first white settler, Peter Cooney, 30 acres (12 ha) in 1825. Settlement proceeded fairly quickly and there were about 400 residents in the 1840s. The first non-residential building in Gundaroo was the Harrow Inn, built in 1834. A post office was built in 1848 and an Anglican church, St Luke's in Upper Gundaroo (now part of a pottery business), in 1849. The first school opened in 1850 and a Police Station in 1852.[5] A major impetus for the growth in the middle of the nineteenth century was the discovery of gold in the district in 1852.[6]

On 7 December 1943, a RAAF Lockheed Ventura crashed three miles south-east of Gundaroo, killing all five crew members.[7] A memorial to the victims was erected in the town.[8] 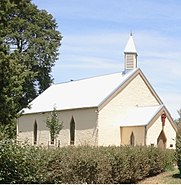 Gundaroo Community Church was originally the Presbyterian Church (1864). It is now under a Uniting Church.