Grover was born on Christmas Day in 1885 to "Charles Lindauer" and Mary Dunne. How he fits into the Lindauer family tree is still uncertain. His marriage certificate needs to be located. He was born in Manhattan and later moved to Rye, New York. His father most likely is Charles Frederick Lindauer I (1835-1921) who may have fathered children with more than one woman.

In the year 1900 he was living in Rye, Westchester County, New York in the home of Charles Frederick Lindauer I (1835-1921) and Anna Augusta Kershaw (1841-1931) under the name "Grover Dunne", and he is listed as a "nephew". As a nephew he would be the child of one of Charles' siblings, our his spouse's siblings.

Also in the household was Louis Miller. Louis and Grover appear together in a photograph that belonged to Eloise Ensko (1882-1966). The photograph is labeled "Grover and brother Louis".

By 1930 he was living at 509 Queen Anne Road in Teaneck, Bergen County, New Jersey. He ran a bar called Old Heidelburg in Teaneck on Cedar Lane.

He was buried in Fairview Cemetery, Fairview, New Jersey.

Sherry Hecht Arnold (1965) took the autosomal DNA test and she shows up as a "distant" relative to Richard Arthur Norton (1958). If our common ancestor was Charles Frederick Lindauer (1836-1921) then we should appear as third cousins.

1900 US census in Rye, New York as Grover Dunne 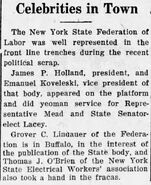 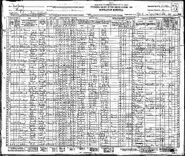