Located in Greenwood Heights, Brooklyn, the cemetery lies several blocks southwest of Prospect Park, between Park Slope, Windsor Terrace, Borough Park, Kensington, and Sunset Park. The architecture critic Paul Goldberger wrote in The New York Times that "it is the ambition of the New Yorker to live upon the Fifth Avenue, to take his airings in the Park, and to sleep with his fathers in Green-wood".[9]

The gates of the cemetery were designated a New York City landmark in 1966,[3] and the Weir Greenhouse, used as a visitor's center, in 1982. The cemetery was listed on the National Register of Historic Places in 1997 and was granted National Historic Landmark status in 2006 by the U.S. Department of the Interior.[2] The Fort Hamilton Parkway Gate and the cemetery's chapel were designated as landmarks by New York City in 2016.[5]

"Brooklyn's first public park by default long before Prospect Park was created",[10] the popularity of Green-Wood Cemetery inspired a competition to design a "Central Park" for NYC. It essentially inspired the creation of Central Park and Prospect Park.

Less inspired by Pére Lachaise Cemetery in Paris, which at the time retained the primarily axial formality of Alexandre Théodore Brongniart's original design,[12] than by recently opened Mount Auburn Cemetery in Cambridge, Massachusetts,[13] where a cemetery in a naturalistic park-like landscape in the English manner was first established, Green-Wood was able to take advantage of the varied topography provided by glacial moraines. Battle Hill, the highest point in Brooklyn, is on cemetery grounds, rising approximately 200 feet above sea level. It was the site of an important action during the Battle of Long Island on August 27, 1776. A Revolutionary War monument by Frederick Ruckstull, Altar to Liberty: Minerva, was erected there in 1920. From this height, the bronze Minerva statue gazes towards the Statue of Liberty across New York Harbor.[14]

The cemetery was the idea of Henry Evelyn Pierrepont,[15] a Brooklyn social leader. The Pierrepont papers deposited at the Brooklyn Historical Society contain material about the organizing of Green-Wood Cemetery. It was a popular tourist destination in the 1850s, and by the early 1860s it was drawing annual crowds second in size only to Niagara Falls.[16] Most famous New Yorkers who died during the second half of the nineteenth century were buried there. Green-Wood Cemetery is still operating with approximately 600,000 graves and 7000 trees spread out over 478 acres (1.9 km2). The rolling hills and dales, several ponds and an on-site chapel provide an environment that still draws visitors. In 2017 it received 280,000 visitors.[16]

There are several famous monuments located there, including a statue of DeWitt Clinton, and a memorial erected by James Brown, president of Brown Brothers bank and the Collins Line, to the six members of his family lost in the SS Arctic disaster of 1854. This incorporates a sculpture of the ship, half-submerged by the waves, as well as a Civil War Memorial. During the Civil War, Green-Wood Cemetery created the "Soldiers' Lot" for free veterans' burials.

The gates were designed by Richard Upjohn in Gothic Revival style. The main entrance to the cemetery was built in 1861-65 of Belleville, New Jersey brownstone. The sculptured groups on Nova Scotia limestone panels depicting biblical scenes of death and resurrection from the New Testament including Lazarus, The Widow's Son, and Jesus' Resurrection over the gateways are the work of sculptor John M. Moffitt.[13] A Designated Landmarks of New York plaque was erected on it in 1958 by the New York Community Trust, and it was designated an official New York City landmark in 1966.[1]

Several wooden shelters were also built, including one in a Gothic Revival style, one resembling an Italian villa, and another resembling a Swiss chalet.[17] A descendent colony of monk parakeets that are believed to have escaped their containers while in transit now nests in the spires of the gate, as well as other areas in Brooklyn.[18][19]

On December 5, 1876, the Brooklyn Theater Fire claimed the lives of at least 278 individuals, with some accounts reporting over 300 dead. Out of that total, 103 unidentified victims were interred in a common grave at Green-Wood Cemetery. An obelisk near the main entrance at Fifth Avenue and 25th Street marks the burial site. More than two dozen identified victims were interred individually in separate sections at the Cemetery of the Evergreens in Brooklyn. Also buried at the cemetery are 6 British Commonwealth service personnel whose graves are registered by the Commonwealth War Graves Commission, 3 from World War I and 3 from World War II, among the latter being Leading Aircraftsman Remsen Taylor Williams (died 1941 aged 26), Royal Canadian Air Force, who is buried in the Steinway Vault.[20]

Green-Wood has remained non-sectarian, but was generally considered a Christian burial place for white Anglo-Saxon Protestants of good repute. One early regulation was that no one executed for a crime, or even dying in jail, could be buried there. Although he died in the Ludlow Street Jail, the family of the infamous "Boss" Tweed managed to circumvent this rule.[21] The cemetery's chapel was completed in 1911. It was designed by the architectural firm of Warren and Wetmore, who also designed Grand Central Terminal, the Commodore Hotel, the Yale Club and many other buildings. The chapel is a reduced version of the upper sections of Christopher Wren's Tom Tower at Christ Church College in Oxford; it was restored in 2001.[11]

In 1999, The Green-Wood Historic Fund, a 501(c)(3) not-for-profit institution, was created to continue preservation, beautification, educational programs and community outreach as the current "working cemetery" evolves into a Brooklyn cultural institution.

There was vandalism on August 21, 2012, one of the worst cases encountered in Green-Wood. Individual(s) was said to have jumped the fence and damaged about 50 monuments and memorials.

On October 13, 2012, another Angel of Music, to replace the one vandalized in 1959, this one made by sculptors Giancarlo Biagi and Jill Burkee, was unveiled to memorialize Louis Moreau Gottschalk.[22][23]

In December 2012 the controversial and much traveled statue "The Triumph of Civic Virtue" by Frederick MacMonnies was moved to Green-Wood.[25]

In August 2013, in partnership with the Connecticut Society of the Cincinnati, signage in the Battle Hill area of the cemetery was updated to reflect new research on Battle Hill's importance in the Battle of Brooklyn.[26]

The Historic Fund's Civil War Project, an effort to identify and remember Civil War veterans buried at Green-Wood, was born of the enthusiasm felt at the rededication ceremony of Civil War Soldiers' Monument. These early graves have either sunk into the soil, been damaged, or have their markers erased.

Vista from the Hillside Mausoleum 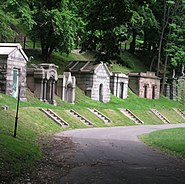 A few of the many mausoleums at Green-Wood

Richard Upjohn's memorial to Hezekiah Pierrepont and his family was built c. 1840s and sits on one of the few man-made hillocks in the cemetery

Largest tulip tree in the cemetery