Gerarda Johanna Bakker was born on 24 May 1885 in Amsterdam. Her parents, Johannes Cornelis Bakker (1851-), a porter and Johanna Magdalena Foppen (1850-1907) married six months later on 25 November 1885. Gerarda had two brothers, Leonardus Gerardus and Petrus Johannes, and a sister, Johanna Maria. Johannes was originally from Leiden, South Holland and Johanna was originally from Maastricht, Limburg. Gerarda was named after her grandmothers: Gerarda van Steen (1822-1893) and Johanna Jansen (1818-1867). Her grandfathers, milk seller Leendert Bakker (1825-1866) and sergeant Johannes Foppen (1815-1858) had both died before Gerarda was born, but both of her grandmothers had remarried: Gerarda to Johannes Brama (1822-1882) and Johanna to Martinus Verheugt (1822-1896). Gerarda's only grandparent alive when she was born was Gerarda van Steen, who lived in Warmond, South Holland. Gerarda's parents marriage certificate shows that they were insolvent, so her parents were obvious facing hard times, especially once two children had been born out of wedlock.

Gerarda lived in Amsterdam all her life. As a young lady she lived with Antonius Paulus Vittali (1880-1957), a brushmaker also from Amsterdam. They had two children before they married: Elias and Johanna Maria. Antonius and Gerarda lived at 32 Roetersstraat, Amsterdam in their early years together. They were in their twenties and trying to raise two children, so it is clear why Antonius and Gerarda proved insolvency and did not have to pay marriage fees. The marriage lasted for 48 years and the couple had nine children, seven of whom survived into adulthood.

Gerarda was widowed when Antonius died on 8 June 1957 aged 77. Gerarda passed away on 5 January 1972 aged 86. She was buried on 10 January 1972 in De Nieuwe Ooster, Amsterdam. Gerarda was survived by six children, twelve grandchildren and three great-granchildren. Her son Elias died less than a month later.

Antonius and Gerarda
Add a photo to this gallery 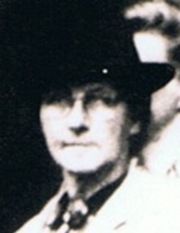