Garrett County is the westernmost county of the U.S. state of Maryland and is part of the Pittsburgh DMA. As of 2000, the population was 29,846. It was named for John Work Garrett (1820-1884), president of the Baltimore and Ohio Railroad from 1858 until his death in 1884. Its county seat is Oakland.

Garrett County lies in the Allegheny Mountains, which forms the western portion of the Appalachian Mountains. The western part of the county, drained by the Youghiogheny River, is the only part of Maryland within the Mississippi River watershed.

The western part of Maryland (including the present Garrett County) was incorporated into Prince George's County in 1696. This county included six current counties, and by repeated splitting, new ones were generated: Frederick from Prince George's in 1748; Montgomery and Washington from Frederick in 1776; and Allegany from Washington in 1789.

Finally, Garrett County was split off from Allegany County in 1872, making it the last county to be formed in the state. The county was named for John Work Garrett, then president of the Baltimore and Ohio Railroad.

Garrett County is governed by county commissioners, the traditional form of county government in Maryland.

The county commissioners exercise such executive powers as exist in the government of the county. 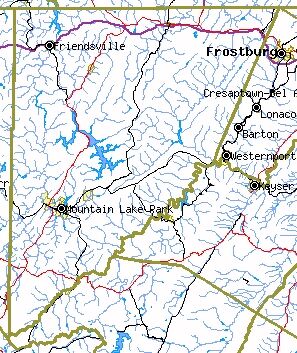 The United States Census Bureau recognizes no Census-Designated Places in Garrett County, which is unusual for Maryland counties, which usually have many unincorporated population centers.

There are some areas in Garrett County that are not listed as CDP's, they are:

Garrett County is part of the Pittsburgh DMA, a regional media market centered in neighboring Pennsylvania.