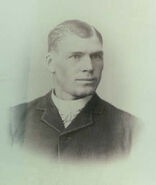 Missionaries in Samoa around 1892. Frank is among them.

Missionaries in Samoa around 1892. Frank is among them.

This is Frank Victor Van Cott and his wife Annie Marie Anderson on their wedding day February 8 1905 in Salt Lake Utah.

Retrieved from "https://familypedia.wikia.org/wiki/Frank_Victor_Van_Cott_(1863-1938)?oldid=1545290"
Community content is available under CC-BY-SA unless otherwise noted.