I have added a single page of the US census as an image. 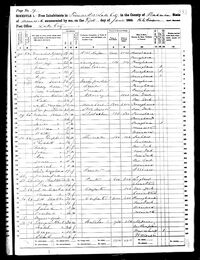 I have also made it a page of its own, for transcription purposes. 1860 US Census, Minnesota State, Wabasha County, Lake Township, Pg 7.jpg

I suggest we use these pages as a 'sandbox' of sorts to create an example of how we would like a standard census page to look.

I am not an admin, so please don't aim discussion at me. I am a genealogist who would like to use images of the census, but see that there are no standardizations in place yet. I don't want to do a bunch of work , then have to go back and redo everything later.

Here's what I included in my example:

Do we need all of these? Or are you including all the larger cat's if you enter it in the smallest?

I believe it is most useful to list all surnames that are listed on that page.

Since the image is available, I think only the header and names are needed. They become searchable then, right?

Finally - Please feel free to discuss what else needs to be added, done, changed...whatever...to make census images most useful to users. Thanks, Lanica 21:58, March 27, 2010 (UTC)

We also have categories like Category:Census of Iowa 1915. Thurstan - Yeah, that was one of the only other census records currently on the wiki. Was there any discussion about that title? Are we trying to include 'of' in every title? Should my page follow that as an example and be renamed 'Census of the United States of 1860, Minnesota State, Wabasha County, Lake Township' ? Lanica 18:17, March 29, 2010 (UTC)

I intend to upload a lot of census images, so I want to get it right the first time...

There is no standard, so you set it.

What about a Project?

Such as using "Familypedia:U.S. Census", then dividing by pages:

Which indexes each state:

Small disadvantage of that arrangement is that users wanting to follow a particular township (which is an extremely common way of searching censuses for individuals) will have to manipulate the address bar (which is easy for you and me but not for every genealogist) or do a lot of jumping. Doubtless a set of templates can be devised so as to take someone in one click from a particular census to the previous and next census of the same place. But the templates might be slightly easier to create if the date were the last element. — Robin Patterson (Talk) 05:26, May 26, 2010 (UTC)

I think a project is a wonderful idea and I would be an active participant.
As Robin says, I would likely pick an area I am familiar with to focus on, then complete several years of that area before moving on to another area of the project. To take his comment a step further, I would like the jump between years to be as simple as possible because it will make it easier to use previous transcriptions to catch spelling errors. Example: I have already worked on my home town for several census years, and after typing in the easy-to-read 1900 census I can now read the handwriting of the harder-to-read years better because many of the names are the same.
I'm not sure how to make this process easiest, but I want to let those who are working on it know that jumping between years is important to me.Lanica 22:42, May 30, 2010 (UTC)