The "J" as his middle name in his World War II record appears to be a truncation of "Jr.", there is no record of a middle name for him. He also appears as "Eugen Freudenberg" again through a truncation in his military records.

Eugene enlisted as a Private in the US Army on September 17, 1943 from Newark, New Jersey. He had completed 1 year of high school and wasn't employed. U.S. forces landed on Luzon, at Lingayen Gulf, on January 9, 1945 and Eugene was killed on January 24, 1945 by gunshot wounds to his chest and stomach. His personal effects consisted of a wallet, 2 knives, a pen, a pencil and a "testament". His personal effects box had been opened and the contents scattered when they were retrieved by the Army. Later an "album" was discovered and forwarded to the family.

Eugene was buried at the Santa Barbara Number 1 Cemetery in the Philippines and was disinterred on August 30, 1948. His skeletal remains were reinterred at Beverly National Cemetery in New Jersey on February 11, 1949. They initially used a Star of David on his plot because they thought the name Freudenberg was Jewish. Florence went to visit the cemetery on October 24, 1949 and told the cemetery officials that he was Christian. They later replaced the Star of David with a Latin Cross. His name is recorded at the National WWII Memorial in Washington, District of Columbia.

The New York Times listed his death in a supplement published on March 20, 1945 on page 14. Arthur Oscar Freudenberg II (1929- ) has Eugene's purple heart and the flag used at his funeral, and may have his military photograph. 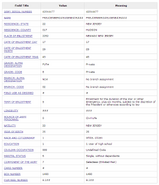 Tombstone in 2011
Add a photo to this gallery
Retrieved from "https://familypedia.wikia.org/wiki/Eugene_Freudenberg_II_(1925-1945)?oldid=872443"
Community content is available under CC-BY-SA unless otherwise noted.