She was born on August 26, 1898 in Kristiania, Akershus, Norway. Her mother had wanted her child to be born in Norway so she went back alone and pregnant to her family to have Ethel, her first child. Her father, Thorvald, stayed in Boston at his job. Thorvald then went to Norway and all her siblings were born there, except for Carl.

In the 1900 Norway Census Thorvald was listed as the "Inspectør [of the] Grand Hotel" in "Portland [Maine], Amerika". They were listed as: "Thorvald Martin Tandberg" and "Alvilde Marie Tandberg" and "Ethel V.A. Tandberg". Thorvald returned to the US around 1907. Alvilde returned to Boston in 1909 with all the children except Ethel who had to finish school in Norway. Ethel graduated from the Kristiania Folkeskole in 1912.

On June 13, 1912 Ethel bought a ticket and was listed as "Ethel Valborg Alfrida Tandberg" born on August 26, 1898, and living at "Reichweinsgaden 3". On June 14, 1912 she was traveling to New York aboard the ship "Kjerschow". The reason for the trip was "til forældrene". (translation: to parents)

She married Clifford Edward Milner (1892-1980) on November 25, 1915 at 778 Morton Street, Mattapan, Boston, Suffolk County, Massachusetts. He was the streetcar conductor and she was a passenger. Her wedding announcement read:

Will live in Dorchester. Miss Ethel V.A. Tandberg the bride of Clifford E. Milner. Miss Ethel V.A. Tandberg, daughter of Mr. and Mrs. Thorvald M. Tandberg of 778 Morton Street, Mattapan, was married last evening to Clifford E. Milner. Reverend A.A. Forhee, pastor of the Berian Baptist Temple officiating. The ceremony took place in the church which was prettily decorated. The bride was attired in a gown of white crepe de chine with chiffon overdress. She wore a long tulle veil, caught in her hair with a spray of orange blossoms. She carried pink roses. She was attended by Miss Yolanda and Miss Thordis Tandberg, sisters, and Miss Hattie Lay, as bridesmaids, who wore pink and blue crepe de ebine and pink satin respectively. They carried white pinks. The best man was Roy McCarthy. A reception was held at the home of the bride's parents. Mr. and Mrs. Milner received their friends standing under a floral bower and received many gifts. They will make their home at 42 Colonial Avenue, Dorchester, after they return from wedding trip. 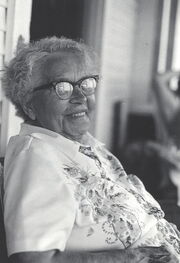