Familypedia
Register
Don't have an account?
Sign In
Advertisement
in: Non-SMW people articles, Schneider (surname), Born in 1886,
and 3 more

Emil had emigrated in 1905 from Bielefeld, Germany and lived in Manhattan.

Emil received his citizenship papers on January 3, 1911 according to his 1911 passport application.

The family returned from Hamburg, Germany to their home in New York City on August 05, 1914, aboard the ship "President Lincoln". They left Hamburg on July 25, 1914. They were living at 80 6th Avenue at the time.

After 1914 Emil moved the family from Manhattan in New York to Red Bank, Monmouth County, New Jersey and then to Jersey City, Hudson County, New Jersey where Eddie attended high school. By 1920 Inga and Emil were living at 2728 Hudson Boulevard and Emil owned a delicatessen. Living with them were Clara Schutz (1895-?), Inga's neice via Sophia. Inga emigrated in 1910 from Norway. Also in the house was Lena Aadnesson (1882-?), a cousin, who emigrated from Norway in 1916.

There was a house fire at his home at Locust Point, near Rumson on the Shrewsbury River around 1926-1927. All his family papers and family photographs were lost.

Inga died on December 29, 1927 and Emil took the children to Germany and Norway to visit family after her death. Inga died of cirrhosis of the liver, she was a heavy drinker.

In 1940 he lived at 6 Livingston Avenue, Arlington, New Jersey at the time of his son's death.

Emil died in 1955 and was buried in Fairview Memorial Park and Mausoleum, Fairview, New Jersey.

1910 US census in Manhattan 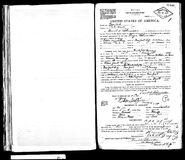