Familypedia
Register
Don't have an account?
Sign In
Advertisement
in: Frenkel (surname), Born in 1908, Died in 1958,
and 12 more

Else Frenkel was the second of three daughters of Jewish tradesman Abraham Frenkel and his wife Helene Gelernter. Because of a pogrom, which took place in Lemberg during 1914, the Frenkel family sought refuge in Vienna. Else graduated from highschool in 1926. She studied mathematics und physics, as well as psychology at the Vienna University and then decided to specialize in psychoanalysis. She received her Ph.D. in 1930 with a thesis on the "Principle of asociations in psychology". From 1931 to 1938 she was a coworker of Karl and Charlotte Bühler at the Psychology Institute of the Vienna University (Section for biographic studies) and also was lecturer at the university. The Anschluss of Austria to Germany in 1938 forced Else Frenkel again to flee from persecution, this time to the United States. The same year she married- psychologist Egon Brunswik (1903-1955).

Else Frenkel-Brunswik received her American citizenship in 1938. From 1939 to 1958 she was Research Associate at the Institute of Child Welfare, Department of Psychology of the University of California in Berkeley. In 1944 she became Lecturer. Besides, from 1944 to 1947 senior staff member of socialpsychologist R. Nevitt Sanford and of the Berkeley Public Opinion Study on antisemitism conducted by psychiatrist und psychologist Daniel J. Levinson. Nevitt Sanford and Theodor W. Adorno were appointed research directors for the "Studies in Prejudice" which were carried out in cooperation with the Institute for Social Research (Institut für Sozialforschung) of Frankfurt, which had relocated to the United States. Else Frenkel was involved mainly by designing and evaluating interviews. She had an important contribution in research on Authoritarian personality, which is considered being a "milestone Study" of moderner social research.

Starting 1947 Else Frenkel had different assignments such as research psychologist and psychotherapist at the Cowell Memorial Hospital of the University of California and as associate research psychologist at the Institute of Industrial Relations of the University of California. She also worked on many research projects in various countries such as the Institute for Social Research in Oslo.

Else and Egon's relationship was not without its problems. Although very devoted to each other, they never had children. After a long and painful bought of severe hypertension, Egon committed suicide. This absolutely devastated his wife. She soon followed Egon's example and overdosed on barbiturates on March, 31, 1958 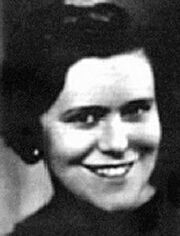