Her father married Sophie Weber in 1851 in Newark, New Jersey. These half-siblings were by her father with his first wife.

All her siblings were born in Pennsylvania, most likely Philadelphia, but she was born after the family moved to Manhattan in New York.

She was buried in the Ensko family plot in Hackensack Cemetery, Hackensack, New Jersey. The list from the cemetery will cost $50.

The photograph included in this biography may be of Eloise Lindauer, it resembles other Lindauer family members and was found undated and unlabeled in the collection of Eloise Ensko II (1925-1993). For comparison see the entry of Eloise Freudenberg nee Lindauer (1860-1935).

Eloise's grand-daughter, Eloise Ensko II (1925-1993), described the family in her memoirs as follows "Eloise Lindauer married William Ensko, of New York City and had four children: William Arthur Ensko, Charles Edward Ensko, Eloise Ensko and Sophie Charlotte Ensko. Uncle Billy was in the linen business and traveled all over the world. He had a son, Arthur, by his wife, Ethel Minerva Beaver. Arthur was married to Jewell Ripple who later on [wasted] away from cancer. He later married Rose La Gattufa. Eloise was mostly at home caring for her aged mother. Before that she worked as a stenographer in a bank. Sophie was a school teacher. She taught English and sewing later in the Junior High School, Public School 52 on Academy Street in New York City, Washington Heights section. Before that she taught elementary school, Public School 181 in New York City. Charles Ensko was my father and the father of Charles Edward, Junior. Charles was manager a firm in Budapest, here in New York City. Later on he went into the publishing business and then Uncle Robert, of Robert Ensko, Inc. Silversmiths, took daddy into the business with him. Daddy remained there until he retired, selling his stock to Stephen Ensko, son of Robert. Daddy also collaborated with on books with Stephen written about old silver. They worked hard learning the business from bottom to top. The books have become rare now. However due to Stephen, your University now has a course in Antique and Early American Silver. They often call in Stephen to give lectures. The University has a complete set of these books. I have a complete set also. The Phi Delta Theta Fraternity at Lafayette College has a set too. This was donated by my father and brother as Charles attended and was graduated from Lafayette College in Easton, Pennsylvania. For a short while Charles attended the Dwight School for Boys which was on Park Avenue in New York City for a spell. Before that he graduated from George Washington High School in Washington Heights."

Eloise Lindauer I (1852-1942) from an unmarked photo in the collection of her great-granddaughter.

1860 US census with Lindauers in Manhattan 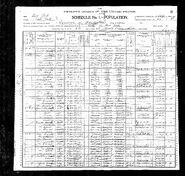