Edward Baglin started school on the 26 August 1913 and left on the 19 December 1919 at the age of 13 years and 9 months. His final school record stated that he was "Energetic & painstaking, and fairly successful in his studies".

When he left school Edward started an apprentice as a Barber and although he quite liked the hair cutting side he couldn't get the hang of shaving; which was a necessary part of the job. So instead he went to work at 'Miles' Boot Factory, Kingswood, Bristol. When the factory was taken over by G.B. Britton in the 1950's he continued working for them but moved to their Soundwell Road Factory in Bristol, where he stayed until his retirement. During his working life he remained a strong Trade Unionist.

After the death of his father in 1908 the properties of 58 & 60 Soundwell Road, Staple Hill, Bristol (formally 7 & 8 Agnus Terrace) were put in trust for him to inherit on his 21st birthday, but with a life interest remaining in 58 Soundwell Road for his mother, Gertrude Rosa. Therefore, in 1928, following his 21st birthday, Gertrude signed the appropriate legal papers and ownership of 58 & 60 past to him. At that time number 60 was being rented by a Mr Shepherd as a house and shop, and to this day is still a shop. Edward Baglin lived at 58 Soundwell Road with his mother and step-father and his wife also (after their marriage in 1931) until 1933 when the whole family (he, his wife, mother and step-father) moved to 14 Sweets Road, Kingswood, Bristol.

Below is a complete list of all addresses (all within ten minutes walking distance from each other) where Edward and his family lived after his marriage in 1931. The family being his wife ‘Florence Eveline Baglin’, their daughter ‘Grace Enid Baglin’ from her birth in 1933 until her marriage in 1951, his step-father until his death, his mother ‘Gertrude Rosa Pratt (formally Burgess)’ until her death in 1958 and mother-in-law ‘Lillian Maud Jenner (formally England) until her death, also in 1958. 14 Sweets Road, where his mother lived, being a frequent return address for him and the rest of the family!

8 Seymour Road, Staple Hill, Bristol built c1895 was sold to General William Bramwell Booth (the son of William Booth, the founder of the Salvation Army) in October 1920 for the purpose of using it as a tied-house for Salvation Army Officers of the Staple Hill Salvation Army Corp, located across the main High Street, less than a minutes walk away.

Between 1946 and 1950 Florence Eveline Jenner (1901-1994), the wife of Edward William Burgess Baglin, attempted to but unsuccessfully ran the shop at 11 Crown Road; she wasn't a naturally born business woman and tended to give generous discounts to family and friends, which obviously cut deeply into the profits. Mrs Jefferies use to help out and be paid to do the cleaning. 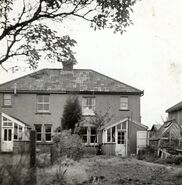 Love of Animals and Nature

Edward was an animal lover. He had 240 mice when he got married and after his marriage expanded into rabbits. Until the 2nd World War he would show his rabbits and mice, and ‘Eva’s cats at the ‘Fur & Feather Shows'. Eva would say "he used to have everything except cows and horses". Edward also specialised, as an amateur, in Dahlias, and used to show these as well.

He was born in Soundwell Road, Staple Hill, and educated at local schools.

He worked for more than 40 years with G. B. Britton and Sons, Kingswood.

Mr. Baglin was closely associated with trade union matters and was a shop steward.

He was very fond of gardening and animals winning many prizes at shows with rabits he bred over a period of many years.

He also won prizes at local shows with dahlias.

For many years he was a musician with the Salvation army bands at Staple Hill and Kingswood, as well as with the Kingswood Evangel Mission Band.

Mr. Baglin had lived in Seymour Road for six years, moving there from Sweets Road, Kingswood.

He is survived by a wife, Eva, a daughter, and two grandchildren.

Funeral arrangements were by H. G. Harris of Staple Hill.

Edward Baglin an active member of the Salvation Army was interested in `Banding'. He started with playing the cornet but later settled for the tenor horn and played in the band in the: -

The photo in the Gallery below of Albion Dockyard Band, Bristol shows Edward Baglin (white circle). The photo is of the band in the foyer of the Odeon Cinema at the bottom of Union Street, Bristol. The Conductor is Herbert Sevier who was first appointed as conductor to the band in 1952. Herbert Seviers nephew played in the Kingswood Evangel Mission Band in the late 1950’s with Edward Baglin playing the Baritone.[1]

Also in the Photo Gallery below is the 'Music Award' to Edward Baglin for passing 'with merit' the music examination held by the 'National Music Board in Band Training' in 'Theory and Rudiments of Music Band Training Methods, orders and regulations for bands dated 20 August 1940. 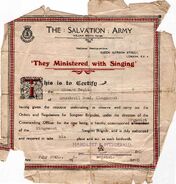 A Peep Into The Past. Bristol Staple Hill Band of 1931 under the leadership of Bandmaster Phillips. 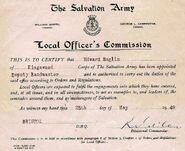 On holiday at Weston-super-Mare with wife and daughter. 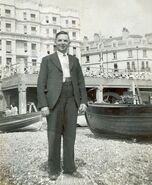 On holiday at Brighton.

On holiday at Weston-super-Mare

At a wedding with wife