Possibly the last person in the LDS Church to practice polygamy upto 1954 when his first wife died.

Edward operated a cattle ranch at the Mormon Colonies in Colonia Juarez, Chihuahua until July 1912 when they were driven out by violent revolutionaries of Pancho Villa. After living in El Paso for approximately one year, the Eyrings relocated to Pima, Arizona. 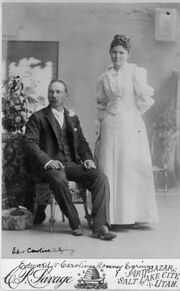