Durlach is a borough of the German city of Karlsruhe with a population of roughly 30,000.

Durlach was bestowed by emperor Frederick II on the margrave Hermann V of Zähringen as an allodial possession, but afterwards came into the hands of Rudolph of Habsburg.

It was chosen by the margrave Charles II in 1565 as residence of the rulers of Baden-Durlach, and retained this distinction though it was almost totally destroyed by the French in 1689.

Margrave Charles III William decided that he needed more space which led to the foundation of Karlsruhe, which in 1715 became the new capital until the state was merged into the grand-duchy of Baden.

In 1846 it was the seat of a congress of the Liberal party of the Baden parliament. In 1849 it was the scene of an encounter between the Prussians and the insurgents.

In 1938 Durlach was incorporated into Karlsruhe, which had grown bigger, with which it is connected by a canal and an avenue of poplars, on the left bank of the Pfinz, at the foot of the Turmberg.

329 people were killed in Durlach during the Second World War.

Important attractions are the Karlsburg Castle in the centre, erected in 1565 and later used as barracks, now with some museums an ancient town hall, a church with an excellent organ, and in the market-place a statue of the margrave Charles II.

The Turmberg ('tower hill') is a vineyard-covered hill of the northern most part of the Black Forest. A castle ruin with watch-tower are located on top of the Turmberg. The watch-tower in particular offers fine views of Karlsruhe towards the west and the Rhine River valley. On very clear days even farther west the Vosges in France can be seen. The Rhine River is the border between Germany and Alsace area of France. The South and East offer nice views of the Black Forest, and since the Turmberg is the northern most tip of the Black Forest you have hills more than actual mountains. A staircase leads all the way up from the bottom of the hill to the top, however you can also ride up using the Turmbergbahn, a historic funicular railway. In recent years the railway was changed from water gravity to electric.

Durlach hosted several factories, producing sewing-machines (Pfaff), brushes, chemicals, tobacco, beer, vinegar, chicory and pipe organs. Now most production has disappeared, except of a producer of homeopathy and dietary supplements. IT companies have taken their place, the biggest Fiducia IT AG, which provides banking services for most German credit unions.

Railway station and avenue from Karlsruhe

Friedrich school in the centre 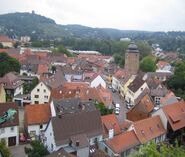