Written by her children:

In 1948, she attended Chelsea High School in Oklahoma. She had an inquiring mind and pursued education all her life. Late in life she purchased a computer and taught herself how to write computer programs. She kept books for various members of the community and was also very interested in genealogy and documented her family history.

On August 14, 1948 Irene married Harry A. Mason, son of L.E. and Maude (Miller) Mason. The Mason's lived just down the road from the Ridenour's and Harry had recently returned home from his service in the Navy during World War II.

In 1958, Irene learned the insurance business at Stroud's Insurance Company in Chelsea. Over the years, she was active in the insurance industry assuming progressively more responsibility until she became an underwriter in the 1970's.

On August 29, 1959 she took her first step towards becoming a pilot and on May 15th, 1960 she obtained her private pilots license and pursued the hobby for several years.

In 1974, Irene transferred from Tulsa, Oklahoma to Houston, Texas with her insurance company where she met and married Bill Kennedy on March 6, 1975.

In 1979, she retired from insurance and moved to Richards, Texas where she and Bill purchased a convenience store. Irene was a member of the Richards School Board for eight years. She loved arts and crafts as evidenced by the various pieces of work she shared with family and friends. Irene joined the Richards Baptist church in 1983.

In 1995, they sold the business and retired, choosing to stay in Richards due to the closeness of the community. 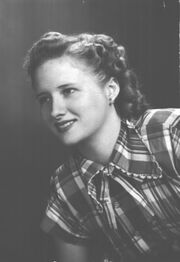