Brother of the Mormon Prophet

Don Carlos Smith, Younger brother of the Mormon Prophet Joseph Smith (1805-1844) and a leader, missionary, and periodical editor in the early days of the Latter Day Saint movement.

Smith was born in Norwich, Vermont, the seventh son of Joseph Smith, Sr. and Lucy Mack Smith. As an adolescent, Smith was an early convert to the Church of Christ that was established by his brother Joseph in 1830. Don Carlos was baptized on June 9 of that year.

Smith was the first editor of the Nauvoo, Illinois-based Latter Day Saint newspaper Times and Seasons. He was also active as an early missionary of the Latter Day Saint church. Smith participated in the ceremony of the laying of the cornerstones of the Kirtland Temple, and he was a member of the temple's construction crew. As a printer and editor, Smith was involved in the printing of the 1835 edition of the Doctrine and Covenants, several editions of the Book of Mormon, and also served as the publisher and editor for the short-lived periodical Elders' Journal.

Smith died in Nauvoo, Illinois, of malarial fever at the age of 25. He was survived by his wife Agnes Moulton Coolbrith, who later became a plural wife of Joseph Smith. Don Carlos Smith was the father of Ina Coolbrith (Josephine Donna), who became the first poet laureate of California.

Smith Family Cemetery, in Nauvoo, Illinois, is the final resting place of this person and several other historical figures in the early LDS Church including the prophet Joseph Smith (1805-1844), his wife Emma Hale (1804-1879), brother Hyrum Smith (1800-1844) and several family members. Additionally their parents are buried there.

Overlooking the Mississippi River, the cemetery is located on Water Street, and is open 24 hours a day to visitors. 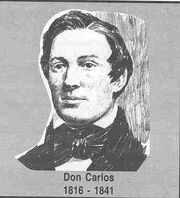