King David - David’s reign was the most brilliant of Israelite history, for (1) he united the tribes into one nation, (2) he secured undisputed possession of the country, (3) the whole government rested upon a religious basis, and the will of God was the law of Israel. For these reasons it was in later times regarded as the nation’s golden age and the type of the more glorious age to which the nation looked forward when Messiah should come (Isa. 16:5; Jer. 23:5; 30:9; Ezek. 34:23–24; 37:24–28).

David close to 20 legitimate sons from his wives and concubines:

These were the sons of David born to him in Hebron: The firstborn was Amnon the son of Ahinoam of Jezreel; the second, Daniel the son of Abigail of Carmel; the third, Absalom the son of Maakah daughter of Talmai king of Geshur; the fourth, Adonijah the son of Haggith; the fifth, Shephatiah the son of Abital; and the sixth, Ithream, by his wife Eglah. These six were born to David in Hebron, where he reigned seven years and six months. (1 Chronicles 3:1-4)

The first book of the Books of Chronicles has a passage that states the sons of David born to him in Hebron, before recounting their sons and then nine more sons and one daughter of David who were also born to him in Jerusalem.

It then lists 4 sons of David and Bathsheba. However we know that their first son died. In 2 Samuel 11 this son is never named. It is therefore possible that he was called Shimea (or Shammua 1 Chronicles 14:4, & 2 Samuel 5:5 ) but equally possible, more likely even, that this is a surviving son, although the Bible does not mention him again. We also know from 2 Samuel 12:24 that Solomon was their second son. Assuming that Solomon is mentioned last as the most important, if the others are listed in order this would make Nathan the fourth or fifth son born by Bathsheba (= Bathshua) and therefore tenth or eleventh of David's sons.

1 Chronicles 6-9 recounts the others born in Jerusalem. "There were also Ibhar, Elishua, Eliphelet, Nogah, Nepheg, Japhia, Elishama, Eliada and Eliphelet—nine in all. All these were the sons of David, besides his sons by his concubines. And Tamar was their sister." [10]

This means Nathan is one of his nineteen (or twenty) legitimate sons. 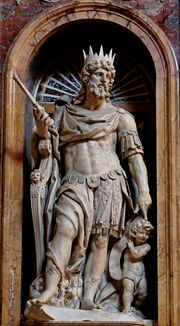