See heraldry for a fuller account of the history, design, and regulation of coats of arms.

A coat of arms or armorial bearings (often just arms for short), in European tradition, is a design belonging to a particular person (or group of people) and used by them in a wide variety of ways. Unlike seals and emblems, coats of arms have a formal description that is expressed as a blazon. 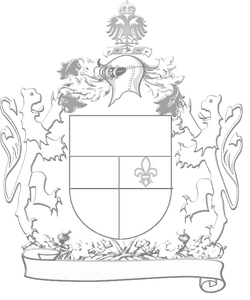 In the heraldic traditions of England and Scotland an individual, rather than a family, had a coat of arms. In those traditions coats of arms are legal property transmitted from father to son, and are used only by one person at any given time. Other descendants of the original bearer could bear the ancestral arms only with some difference: usually a color change or the addition of a distinguishing charge. One such charge is the label, which in British usage (outside the royal family) is now always the mark of an heir-apparent.

Because of their importance in identification, particularly in seals on legal documents, the use of arms was strictly regulated; few countries continue in this today. This has been carried out by heralds and the study of coats of arms is therefore called "heraldry." Some other traditions (e.g. Polish) are less restrictive — allowing, for example, all members of a dynastic house or family to use the same arms, although one or more elements may be reserved to the Head of the House.

In Scotland, the Lord Lyon has criminal jurisdiction to enforce the laws of arms. In England, the use of arms is a matter of civil law.

Today, the term "coat of arms" or "arms" is frequently applied in two different ways. In some uses, it may indicate a full achievement of arms or heraldic achievement, which includes a variety of elements — usually a crest sitting atop a helmet, itself sitting on a shield; other common elements include supporters holding up the shield and a motto (beneath in England, above in Scotland). Some people wrongly use "coat of arms" or "arms" to refer to the escutcheon (i.e., the shield itself), or to one of several designs that may be combined in one shield. (Note that the crest is one specific part of a heraldic achievement and that "crest of arms" is a misnomer.) The "coat of arms" frequently are adorned with a device - a motto, emblem, or other mark used to distinguish the bearer from others. If a motto is a part of the achievement, it sometimes has some punning allusion to the owner's name. A device differs from a badge or cognizance primarily because it is a personal distinction, and not a badge borne by members of the same house successively.

The Japanese equivalents, called kamon (often abbreviated "mon"), are family badges which often date back to the seventh century, and are still actively used in Japan today.

In the Nordic countries, provinces, regions, cities and municipalities have a coat of arms. These are posted to the borders and shown in official documents advertising the area.

At a national level, "coats of arms" were generally retained by European states with constitutional continuity of more than a few centuries, including constitutional monarchies like Denmark as well as old republics like San Marino and Switzerland. Since 1989, some of the ex-Communist states, such as Romania, have resumed their former arms, often with only the symbols of monarchy removed.

The Great Seal of the United States is often said to be the coat of arms of the United States of America. Although the seal contains some armorial elements, it was not designed to be used as a coat of arms and does not fully conform with European heraldic traditions. However, the main point of contention in this dispute is a matter of wording; the blazon is intentionally improper to preserve the number 13 in the symbolism. Nevertheless, the design of the Great Seal of the United States owes more to Roman civil government seals than to medieval European heraldry. The U.S. state of Vermont, founded as the Vermont Republic, follows the American convention of assigning use of a seal for authenticating official state documents, but also has the coat of arms of Vermont. It is the only U.S. state to have authentic armorial bearings described in a blazon.

However, today, nearly every nation in every part of the world has its own coat of arms, in many cases emblems that do not fully conform with European heraldric traditions. Such coats of arms often combine a European form with indigenous emblems. For example the coat of arms of Kenya features a shield in the shape of shields traditionally used by the Maasai, and a motto in Swahili.

Note that not all personal or corporate insignia are heraldic, though they may share many features. For example, flags are used to identify ships (where they are called ensigns), embassies and such, and they use the same colors and designs found in heraldry, but they are not usually considered to be heraldic. A country may have both a national flag and a national coat of arms, and the two may not look alike at all. For example, the flag of Scotland (St Andrew's Cross) has a white saltire on a blue field, but the royal arms of Scotland has a red lion within a double tressure on a gold field.

Wikimedia Commons has media related to:
Coats of arms

Wikimedia Commons has media related to:
Elements of Coat of arms

Retrieved from "https://familypedia.wikia.org/wiki/Coat_of_arms?oldid=565184"
Community content is available under CC-BY-SA unless otherwise noted.