Familypedia
Register
Don't have an account?
Sign In
Advertisement
in: Non-SMW people articles, Schultz (surname), Born in 1895,
and 3 more

She was the only child of Mathilde Sophie Amalia Pedersen (1872-1949) aka Sophie Pedersen, of Farsund, Norway; and Hans Andreas Carlsen Schultz (1867-1896) of Korshavn, Norway.

She appeared in the 1900 Norway Census living in Farsund at Nykastelgaden 72a. Her mother was already a widow, and her mother was working as a "restauratrice"

Around 1902 Matilde Sofie married Martin Andreassen (1865-c1940) aka Martin Anderson, a sailor and farmer. They lived in Korshavn, Norway.

She left Kristiansand, Norway for the United States on October 23, 1908 and she was traveling alone. She was listed as "Klara Schultz" and listed her residence as "Lyngdal" and her reason for travel as "reiser til slegtninger". When she arrived she lived in Jersey City, New Jersey with her aunt, Inga Pedersen (1885-1927); and Inga's husband, Emil August Schneider (1886-1955).

On August 05, 1914 Clara was returning to New York from Hamburg on the ship "President Lincoln". She was unmarried and traveling alone, and listed her residence as New York, and her ethnicity as Norwegian. In 1914 there was a family gathering in Norway. Others who went were: Otto Perry Winblad; Salmine Pedersen; John Edward Winblad; and Lena Olsen. Salmine and John both died in Norway on the trip. Clara also left from Kristiansand, Norway on March 12, 1915, aboard the "Thingvalla". She was working as a "tjenestepige", a maid. She was traveling with her children: Sigrid Schultz and Peder Schultz.

She married Edward A. Thompson I (1895-1935) aka Trigsa Thompson, of Virginia, in Jersey City, New Jersey around 1921. Together they had at least two children: Edward A. Thompson II (1929- ) who married and was a banker; and Dorothy Thompson who later married.

Klara died in 1973 in Englewood Hospital of a "myocardial infarction" with "arterial hypertension", and "coronary sclerosis". She also had cirrhosis of her liver. She was living at 666 Maple Avenue in Ridgefield, Bergen County, New Jersey at the time of her death. She was listed as "Clara Muhlbruch".

Ridgefield, New Jersey. Clara H. Muhlbruch, 77, former restaurant owner. Clara H. Muhlbruch of 666 Maple Avenue died yesterday in Englewood Hospital. She was 77. Until 15 years ago, Mrs. Muhlbruch was the owner and operator of a restaurant here, known as Chef's Corner. She was born in Norway and lived in Ridgefield 20 years. She was formerly of Union City. Surviving are her husband, John Muhlbruch; a daughter, Dorothy Leale of Fort Lee; a son, Edward Thompson of Ridgefield, and three grandchildren. Services will be tonight at 8 in Blackley Funeral Home, 809 Broad Avenue. Burial will be tomorrow morning in Fairview Cemetery, Fairview. Friends may visit the funeral home today from 2 to 4 and 7 to 9 p.m. (Source: The Record of Hackensack, New Jersey on February 2, 1973)

She was buried in Fairview Cemetery, Fairview, Bergen County, New Jersey on February 01, 1973 under the name of "Clara Muhlbruck". She was buried with 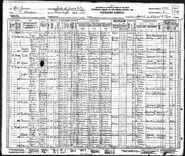 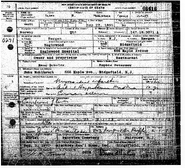 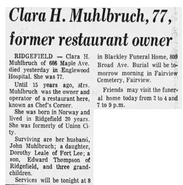