Not to be confused with Chase, Kansas.

Chase County (county code CS) is a county located in the U.S. state of Kansas. As of the 2010 census, the county population was 2,790.[1] Its county seat and most populous city is Cottonwood Falls.[2]

The county has been the subject of a book by William Least Heat-Moon. Notre Dame coach Knute Rockne died in a 1931 plane crash in the county. The Tallgrass Prairie National Preserve was established in the county in 1996. The center of population of Kansas is located in Chase County, about four miles north of Strong City.

For many millennia, the Great Plains of North America was inhabited by nomadic Native Americans. From the 16th century to 18th century, the Kingdom of France claimed ownership of large parts of North America. In 1762, after the French and Indian War, France secretly ceded New France to Spain, per the Treaty of Fontainebleau. In 1802, Spain returned most of the land to France, but keeping title to about 7,500 square miles.

In 1803, most of the land for modern day Kansas was acquired by the United States from France as part of the 828,000 square mile Louisiana Purchase for 2.83 cents per acre. In 1848, after the Mexican-American War, the Treaty of Guadalupe Hidalgo with Spain brought into the United States all or part of land for ten future states, including southwest Kansas. In 1854, the Kansas Territory was organized, then in 1861 Kansas became the 34th U.S. state.

In 1806, Zebulon Pike led the Pike expedition westward from St Louis, Missouri, of which part of their journey followed the Cottonwood River through modern Chase County.[3]

In 1859, Chase County was established within the Kansas Territory.

In 1871, the Atchison, Topeka and Santa Fe Railway extended a main line from Emporia to Newton.[4] In 1887, Atchison, Topeka and Santa Fe Railway built a branch line from Neva (3 miles west of Strong City) to Superior, Nebraska. This branch line connected Strong City, Neva, Rockland, Diamond Springs, Burdick, Lost Springs, Jacobs, Hope, Navarre, Enterprise, Abilene, Talmage, Manchester, Longford, Oak Hill, Miltonvale, Aurora, Huscher, Concordia, Kackley, Courtland, Webber, Superior. At some point, the line from Neva to Lost Springs was pulled but the right of way has not been abandoned. This branch line was originally called "Strong City and Superior line" but later the name was shortened to the "Strong City line". In 1996, the Atchison, Topeka and Santa Fe Railway merged with Burlington Northern Railroad and renamed to the current BNSF Railway. 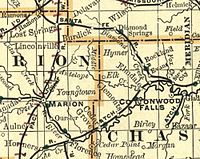 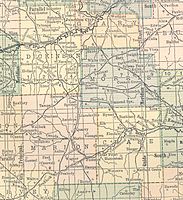 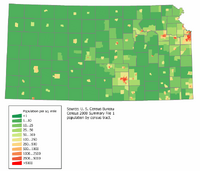 2000 Kansas population map.
Add a photo to this gallery

Chase County is centrally located in the eastern half of the state in the Flint Hills geologic region. It's located in the Neosho River drainage basin.[7]

Following amendment to the Kansas Constitution in 1986, the county remained a prohibition, or "dry", county until 1988, when voters approved the sale of alcoholic liquor by the individual drink with a 30% food sales requirement.[17]

Chase County is divided into nine townships. None of the cities within the county are considered governmentally independent, and all figures for the townships include those of the cities. In the following table, the population center is the largest city (or cities) included in that township's population total, if it is of a significant size.

The following sites in Chase County are listed on the National Register of Historic Places: