The facsimile of his birth record uses the year "1891". However his World War I draft registration used the year "1896".

He was buried in Crest Haven Memorial Park, in Clifton, New Jersey with: 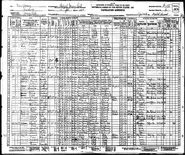 1941 World War II draft
Add a photo to this gallery
Retrieved from "https://familypedia.wikia.org/wiki/Charles_Godfrey_Kahrar_(1896-1959)?oldid=881630"
Community content is available under CC-BY-SA unless otherwise noted.