Their engagement was reported in the New York Times on April 11, 1948: "Van Ausdel - Ensko. Mr. and Mrs Joseph B. C. Van Ausdel of 325 East Forty-first Street have made known the engagement of their daughter, Mary Jean, to Charles E. Ensko, Jr. ..."

Charles Edward Ensko II (1921-2004) said on July 26, 2003: "The first Lindauers settled in Philadelphia and may have been involved in horse racing. I have the sofa and chairs from the Philadelphia house that belonged to the Lindauers. My grandmother gave the chairs to me. My grandmother had Alzheimer's and died at age 90 around 1941. My two aunts moved into the apartment and when they died I got the furniture. My grandmother went to a finishing school called Rutgers where the reservoir was in Manhattan, New York. The school was on 44th Street near a clothing store. My grandmother played the piano until she got Alzheimer's. She had cousins called Addy Lindauer, Minny Lindauer and Grace Lindauer that lived in Washington Heights by us. In the 1930s they would come over to our house. Grace Lindauer was married and had a child that died. He fell down a flight of stairs in the large house in Rye, New York in Westchester County. The house in Rye was very big on a couple of acres. Robert Ensko had a shop that sold silver at 682 Lexington Avenue that was three stories high and they owned the building." 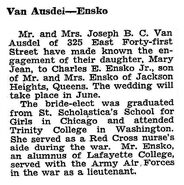 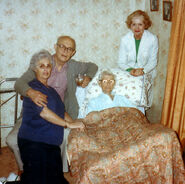