There were other children and more work will have to be done to find the entire set of siblings in the Irish baptismal books.

Catherine died at Nassau Hospital in Mineola in Nassau County, New York. Her death certificate number was "12069". Her cause of death was "brachiogenic carcinoma with diastomal obstruction". She also suffered from thrombosis of her superior vena cava. She was hospitalized on January 17, 1941 and died on February 06, 1941. She was 74 years old. She was living at the home of her daughter, Winifred at 32 First Street in Miracle, North Hempstead on Long Island.

Catherine was buried in Calvary Cemetery in Woodside, Queens, New York, with her husband and her three children that died as infants: Thomas, Richard and Mary. 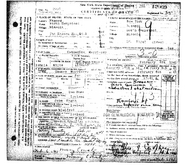 1941 death certificate
Add a photo to this gallery
Retrieved from "https://familypedia.wikia.org/wiki/Catherine_Mary_Hogan_(1864-1941)?oldid=792618"
Community content is available under CC-BY-SA unless otherwise noted.